In Canada significantly fewer patients with MS were born in November compared with controls from the population census and unaffected siblings. These observations were confirmed in a dataset of British patients. A pooled analysis of datasets from Canada, Great Britain, Denmark, and Sweden showed that significantly fewer (8.5%) people with MS were born in November and significantly more (9.1%) were born in May. The month of birth and risk of MS are associated, more so in familial cases, implying that there is some interactions between genes and environment that may be related to climate. Such interactions may act during gestation or shortly after birth in individuals born in the countries studied. 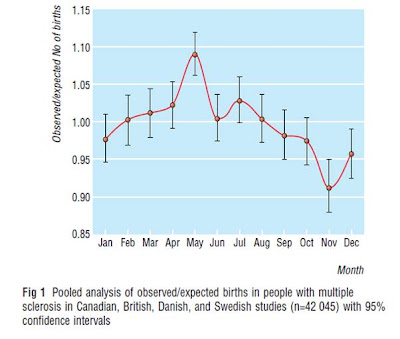 “The finding that your month of birth affects your risk of MS is very interesting and tells us something about the causal pathway in MS. The current hypothesis is that if your mother was pregnant during winter ( and you were born in April), a time when she is more likely to be vitamin D deficient, it affected the development of your immune system making you more likely to develop MS in later life. On the other hand if you mother was pregnant in summer ( and you were born in November), this lowers your chances of getting MS. This study supports another Prevent MS strategy we are promoting, i.e. high-dose physiological supplementation of vitamin D in pregnancy. If only the British public health officials will take this on board; they have in France.”