MS can be viewed as a complex genetic trait in which occurrence rates in offspring are 20 to 50x greater than in the general population. In this very clever study the investigators studied the recurrence risk of MS in half-siblings with respect to their parent in common, i.e. mother or father. The risk of MS to full-siblings was 3.11%. By contrast, half-sibling risk in the same families was significantly lower at 1.89%, but higher than expected if familial risk was simply polygenic (due to multiple genetic factors). For maternal half-siblings (mother in common), the risk was 2.35%, and 1.31% for paternal half-siblings (father in common). Conclusions: the difference in risk suggests a maternal parent-of-origin effect in multiple sclerosis susceptibility. 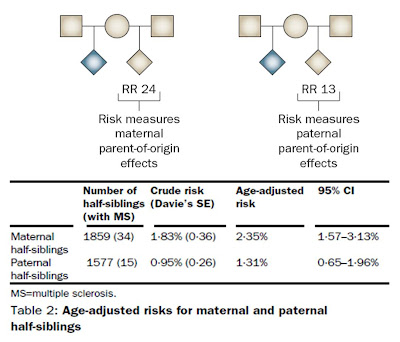 “This is a very important study and suggests that a mother is more likely to transmit the risk of MS to her offspring than a father. This could be due to epigenetics, i.e. the imprinting on the genome that is known to occur (see previous post), or the possible vertical transmission of a virus from mother to child. Vertical transmission is well described with several viruses the most analagous being HTLV-1 a retrovirus that causes a progressive spinal cord syndrome called HTLV-1 associated myelopathy (HAM) or tropical spastic paraparesis (TSP). Whatever the reason for the parent-of-origin effect it needs to be explained by any MS causation theory.”
CoI: Nil
For more information on epigenetics click here
For more information on HAM or TSP click here