After the human genome project was completed in 2003 it was predicted that “predictive genetic tests will exist for many common conditions”, but nearly 10 years on how close are we to being able to predict disease risk from a person’s DNA?
Multiple sclerosis does not result from something wrong in a single gene, but is instead subtly influenced by a combination of many different genes, as well as environmental factors such as vitamin D, smoking and EBV. In the 1970s, a form (allele) of the HLA-DRB1 gene, called HLA-DRB1*15, was shown to increase the risk of MS by 3-fold (300%). Only recently has further understanding of the genetics of MS been made as genome-wide association studies (GWAS) have identified approximately 50 locations in the human genome which also influence risk. The gene variants discovered by GWAS barely nudge someone’s overall risk, typically increasing it by a factor of 1.1–1.3 (10 to 30%).

It is now possible to perform a GWAS on yourself in attempt to work out your individual risk for developing disease. Being a geneticist particularly interested in risk prediction, I signed up to a genetic test from 23andme (note we are not advising for anyone to do this). I received my results yesterday and the first thing I did was to look at my disease risks.

23andMe gives calculates my risk according to my genes and then compares to this the population risk. Based on my genotype data I am at “decreased risk” for MS 0.2% as compared to the average risk of 0.3%. 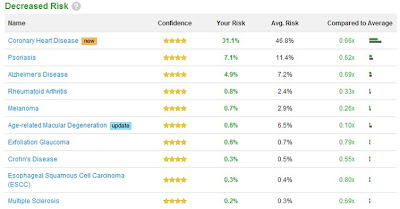 Looking in more detail, this is based on the risk associated with two genetic markers, HLA-DRB1 and a gene identified by GWAS, called IL7RA which codes for an immune molecule called interleukin 7 receptor alpha. I have the risk allele for IL7RA but not HLA-DRB1*15. Because HLA-DRB1*15 is the key genetic locus in MS, not having this risk allele has a major impact on my risk.

How robust are these risk estimates? The risk associated with each genetic variant can vary across different populations, environments and age groups and, as a consequence, affect disease risk estimates and thus anything provided by 23andme needs to be taken in context. These caveats aside, it is a bit disappointing that 23andme only look at two genetic markers- there are now more than 20 genes associated to MS (De Jager et al. Nat Gen 2009), and so if I had all the other risk alleles what then would be my risk?

However, because the genetic risk loci are common in the general population (i.e. 20% of everyone in the UK carry HLA-DRB1*15 but will never develop MS), the question remains whether by studying just genetics will MS be predictable? A study to address this by Phil de Jager and colleagues at Harvard (De Jager et al.) has shown the predictive power of 16 MS risk loci together is generally not great.

So will it ever be possible to predict who will develop MS? As the previous post discusses, the environment can alter the risk associated with a genetic marker (called a gene-environment interaction). Combining HLA and smoking increases MS risk by more than 1000%- a huge effect. By including other data (e.g. EBV antibody levels, vitamin D levels) it might be possible to develop a model with strong predictive power and to identify individuals in which preventative measures could be studied.

One of the major goals of the Giovannoni group is to see if MS is predictable and therefore preventable. Watch this space.

COI: I have a pen from 23andme

Posted on behalf of Sreeram Ramagopalan (our vD Champion)