In response to a comment about vitamin D2 versus D3:

Vitamin D2 (calciferol) and D3 are generally considered to be equivalent in humans.

This study compared the relative potencies of vitamins D2 and D3 by giving a single dose of 50,000 IU of the respective vitamins to 20 healthy male volunteers and followed the time course of blood vitamin D aover a period of 28days.
The two vitamin D preparations produced similar rises in blood concentration of the administered vitamin, indicating equivalent absorption from the gut.
Both produced similar initial rises over the first 3 days, but the important form of vitamin called 25-hydroxy vitamin D continued to rise in the subjects who received vitamin D3 peaking at day 14. In comparison 25-hydroxy vitamin D fell rapidly in the subjects who received vitamin D2.
A mathematical analysis called the area under the curve analysis up to day 28 showed that relative potency for vitamin D3 to D2 was 9.5 to 1.
Conclusion: The potency of vitamin D2 potency is less than one third that of vitamin D3. People who have to use of vitamin D2 should be aware of its markedly lower potency and shorter duration of action relative to vitamin D3. 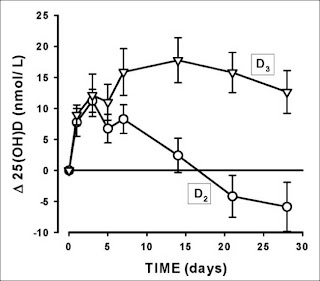 Armas et al. Vitamin D2 is much less effective than vitamin D3 in humans. J Clin Endocrinol Metab. 2004 Nov;89(11):5387-91.
“It is clear that vitamin D3 is superior to vitamin D2 and therefore you will need to take more vitamin than D2. However, as there are many factors that contribute to vitamin D deficiency (diet, skin colour, sun block use, sun exposure, latitude, pollution  genetic factors, etc.) the best solution would be to monitor blood levels as a guide to your vitamin D requirements. It may not be easy to get your family doctor or GP to agree to this, but you may be able to use this as an opportunity to raise awareness about the vitamin D problem with them.”