As you have seen the pecha kuca from Prof G
I present mine in a much more low tech way. Drug-Game Part 1

Why Does it take So Long to Develop a Drug For MSers
Find Out! Play…….Drug

Basic Rules
File Patent to Start (Throw a six pay £100,000). The patent gives you legal protection to develop your drug for a number of years before competitors can do anything similar. There are no Short Cuts (Throw 3 or above to move one space forward). Each Space Forward Costs You Money. The Further You Go the More it CostsYou need Money in Hand to Move to the Next Stage of Paper Work.First to Get Across the Finish Line Wins.. Get $1billion 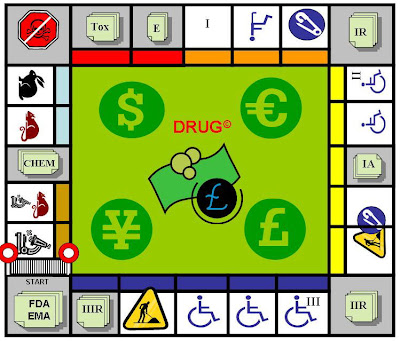 Do the paper work such that you hopefully gets approval by NICE
Convince Government to prescribed the drug to MSers
The Drug Company checks to ensure that drug continues to be safe. Phase IV

However back to the Game. You can’t do all this without money, so we need a Financial Zone 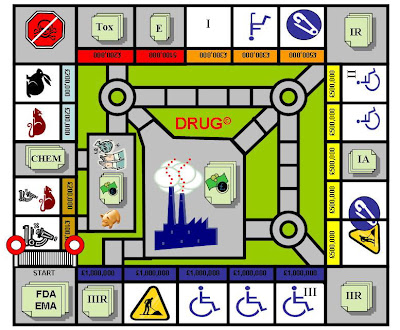 This contains Charties, Philantrophist, Government, Venture Capitalist and Drug Companies. Stay in Financial Zone and take as many turns as necessary to get enough funds to proceed

Each Move in the Financial Zone is the throw of the Dice……….
This can mean it takes time to go back to charities at each stage of development
Therefore it helps if you have the Support of a Drug Company At each set of Paper Work, Turn a Card (See next installment for details) to See your Fate! 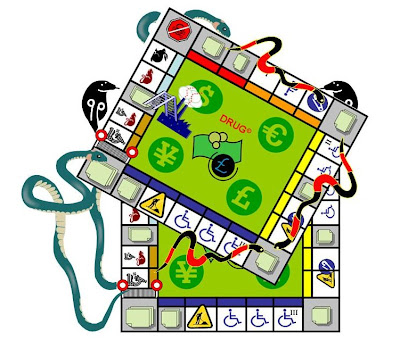 Remember…there are a lot more Snakes than there are Ladders,
Many of them will Send you back to Start!

“This week you have seen that Lacquinimod failed to reach the target in a phase III study. The company either has to do the trial again or go back to the start! A few months ago Movecto (Cladribine) reached the stage of Regulatory Approval

and was withdrawn.
Gilenya turned down by NICE for being too expensive”.

Play Drug to see the reasons.

A game of chance..where the winner takes all and the loser really looses..big time!!

FastForward aim to help bridge the funding gap in Innovation. Maybe you can help them to help others. We thank them for their support. We also thank All the other Charities that Support our Work