Trigeminal neuralgia is a severe sharp shooting pain that occurs in the distribution of one of the branches of the trigeminal nerve that supplies the face. In MS trigeminal neuralgia results from a lesion in the area of the brain where the trigeminal nerve leaves the brain stem. The pain is often described as  being like and electric shock and is often triggered by sensory stimuli, for example eating, brushing your teeth, touching your face, etc. The pain is typically very severe and frequently debilitating. It has many different causes. When it occurs as a complication of MS it is often very difficult to treat. 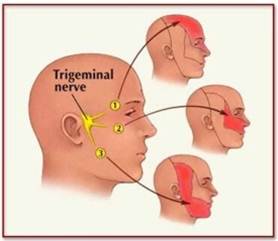