Response to Immune Therapy. For many, many years the problem of MS whether it was primary, secondary progressive or relapsing-remitting disease was thought to be a problem of the immune system. Therefore, dealing with the white blood cell problem would sort out MS. Unfortunately this was actually part of the story and bad news for progressive MSers.

The most current drugs that are effective at stopping relapsing MS, aim at stopping white blood cells (green cars) getting into the brain (carpark). Tysabri works by stopping white blood cells crossing the blood vessels of the brains (Stops the cars leaving the road and entering the carpark by building a wall at the carpark entrance). Gilenya stops white cells from entering the blood and Alemtuzumab kills cells (Gren cars) so it clears the blood (roads) of cells so it’s like having a roadblock. 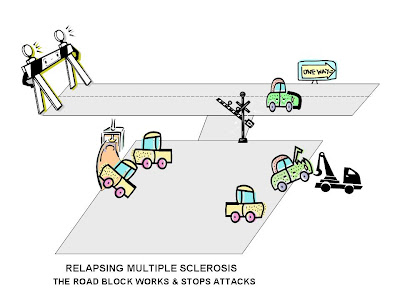 However, doing the same in progressive MS does not work, because the main problem is not the cars in the carpark, but the hole in the car park. 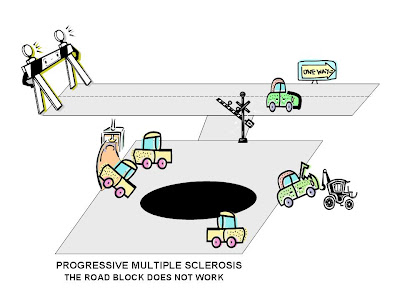 However, once the hole is made, even if you fill in the hole and repair the damage, these treatments may not work (I say may not work rather than will not work as the Jury for Gilenya is still out as is the case for Tysabri, but in my humble opinion the writing is on the wall, I am afraid to say). However, there are other things that Gilenya may do, not relating to its effects on white blood cells (cars), that could prove me wrong let’s hope so. 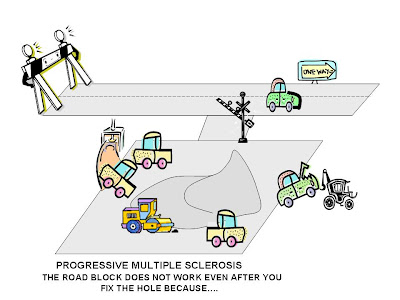 You have sugested that MS drugs don’t work, because they don’t get into the brain. This a good point but the reason for this failure is that the main problem with progressive MS is not the immune system (green cars), it is that they have caused a problem with the underground network (nervous system). Thus the cars can start a blockage on the Underground line. 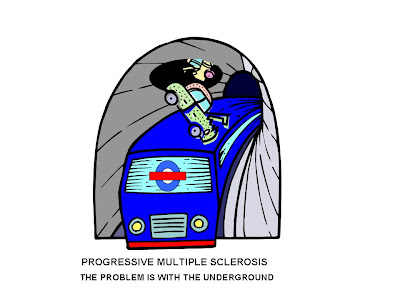 This is a current theory, another one is that there could be an inherent problem with the tunnels (that collapse) and the cars in the carpark just influence the collapse. Getting drugs to control white cell function in the brain will be part of the solution. The only way to really decipher how this happens is to target this pathway with drugs that should work and if they do, you have a good idea that you are on the right track…pun not intended.