We have now built up the picture to understand the probable causes of Progression. I say probable as this is still theory, I’m afraid to say.
At each tube station (Node of Ranvier), people (ions) will enter and leave the train (nerve impulse). In health this is a balance between people leaving the train (red characters) and people entering the train (black characters) and the trains do not stay in stations too long. Therefore, trains do not get over crowded.

However once a trainline gets blocked because the cars fall on a train and break the tunnel (demyelination), the nerve impulse is slowed or stopped. 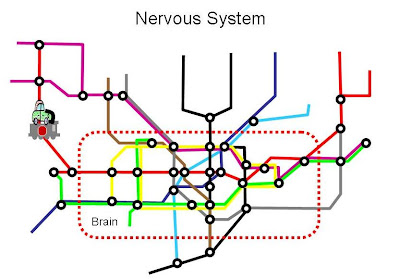 Synaptic plasticity (part III) will begin, so you use different tube lines to get where you are going, but as the train stay in stations longer, more people enter the train. Overcrowding starts.

Too many people enter the train and someone faints. The train overheats and breaks down. This blocks another piece of the tube networks. Progressive MS has begun. This no longer concerns the cars (white blood cells) on the road above.

Therefore Progression needs a different treatment. See you in a couple of days TTFN