OBJECTIVE: Recent studies have shown the relevance of the cerebral grey matter involvement in MS. The number of new cortical lesions (CLs), detected by specific MRI sequences, has the potential to become a new research outcome in longitudinal MS studies.

AIM: To define the statistical model better describing the distribution of new CLs developed over 12 and 24 months in patients with RRMS.

METHODS: Four different models were tested on a group of 191 RRMS patients untreated or treated with 3 different disease modifying therapies. Sample size for clinical trials based on this new outcome measure were estimated by a bootstrap resampling technique. 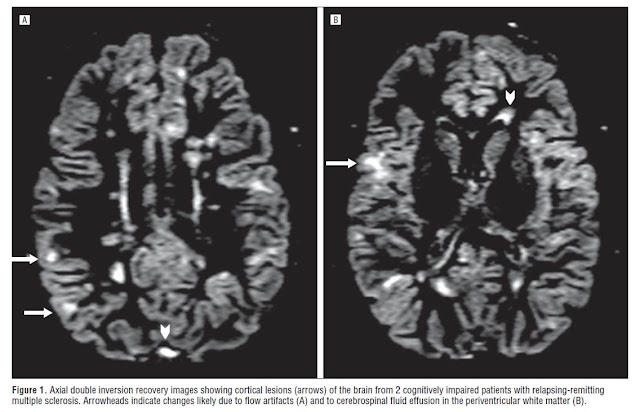 RESULTS: The zero-inflated Poisson model gave the best fit for new CLs developed over 12 and 24 months both in each treatment group and in the whole RRMS patients group adjusting for treatment effect.

CONCLUSIONS: The sample size calculations based on the zero-inflated Poisson model indicate that randomized clinical trials using this new MRI marker as an outcome are feasible.

“Why is this study important? Because it focuses on an area of the disease that until recently has been hidden from view and which contributes a lot to the burden of the disease. We simply need therapies that protect the gray matter; gray matter is the part of the brain that use to think – it makes us who we are. MS disease in gray matter results in cognitive impairment and contributes to fatigue. By stopping gray matter pathology we may be able to protect MS’ers from developing cognitive impairment.”

“Again progressive MS’ers seem to have been forgotten in this study. I will write to Professor Sormani to ask her if she has a data set to look at this issue in people with SP and PP MS.”