BACKGROUND:  In subjects presenting with a first clinical demyelinating event that is suggestive of MS, treatment with interferon beta can delay the occurrence of further attacks and the onset of MS. This study investigated the effects of two dosing frequencies of subcutaneous interferon beta-1a (Rebif) in subjects with a first clinical demyelinating event.

METHODS: Subjects with a single clinical event suggestive of MS, and at least two clinically silent T2 lesions on brain MRI were randomly assigned in a 1:1:1 ratio to receive subcutaneous interferon beta-1a 44 μg three times a week or once a week (plus placebo twice a week for masking), or placebo three times a week for up to 24 months. 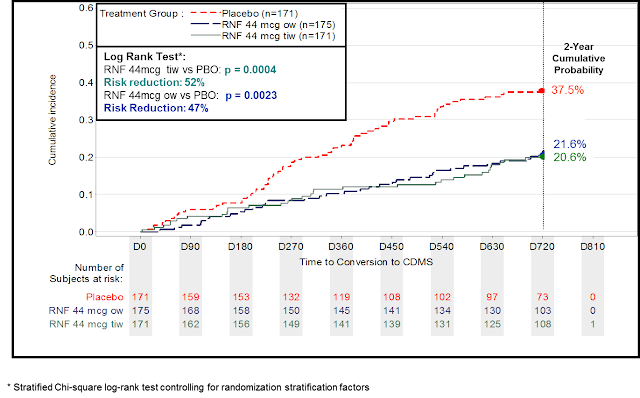 “The final study in the tetralogy of the injectables. Avonex, Betaferon/Betaseron and Copaxone already have a license for use after the first clinical event or CIS. Although the higher dose was slightly more effective on MRI there was no differences in relation to the occurrence of clinical events. This means that from a clinical perspective once weekly Rebif is as good as 3x per week Rebif. Using once weekly injections would be a major cost-saving for individuals and healthcare systems feeling the strain in this time of austerity. I wonder if the NHS will get wise to this? Then under the Department of Health’s risk-sharing scheme guidance we are not meant to be using DMTs for CIS.”