BACKGROUND: To determine the effect of memantine on axonal loss and visual function during the course of optic neuritis (ON).

METHODS: Sixty optic neuritis patients in a single-center, institutional setting were randomly assigned to the memantine or placebo groups. Patients with first attack of acute unilateral optic neuritis, with visual symptoms of 8 days duration or less were enrolled in this trial.

No patient had known multiple sclerosis, and none had taken immunomodulatory agent prior to or at the time of presentation. For all patients, the following characteristics were recorded and compared at initial presentation and 3 months afterward: visual acuity (sight), retinal nerve fiber layer thickness (measure of nerve (retinal ganglion cell) content in the retina, that can reflect changes in the optic nerve btween the eye and the brain), visual field parameters, visual evoked potential (measure of electrical signalling between eye and brain and shows nerve loss and demyelination), and contrast sensitivity (MSers have more problem seeing grey eye charts than black eye charts).

RESULTS: Fifty-four patients completed the 3-month follow up. There were no significant differences between the placebo and memantine groups for any of the characteristics at initial presentation. After 3 months, the only statistically significant difference between the two groups was in RNFL thickness. Memantine group subjects had higher thickness in nasal (P = 0.01), superior (P = 0.006), inferior (P = 0.01) quadrants and average (P = 0.01). However, temporal quadrant thickness was not different between two groups (P = 0.35). (Back of the eye [Fundus) is divided into quarters of a diagonal cross (nasal=towards nose temporal towards the temple/ears. Superior top and inferior bottom. The temporal and nasal regions have less nerve content than superior and inferior quadrants)

CONCLUSION: Memantine was effective in reduction of RNFL thinning, although this structural difference was not associated with improved visual function 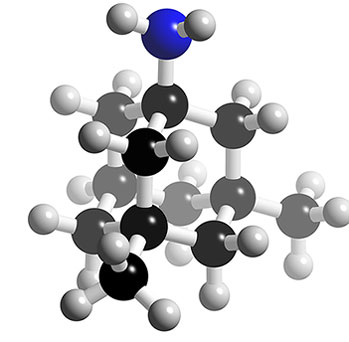 Memantine (marketed under a variety of trade names) is an glutamate (excitory neurotransmitter) receptor antagonist that is used in Alzheimers Disease, where it has a small positive effect on cognition. To date there is no evidence for an influence of memantine on memory in clinical trials in MS, although it may have some influence as a symptom control in conditions such as nystagmus.

Whilst it is perhaps disappointing that there was no obvious clinical improvement, this study is interesting because it supports some of our experimental findings for a neuroprotective (as RNFL thickness is correlated with nerve content) potential for memantine and importantly supports the thought that studies in optic neuritis may help to identify neuroprotective compounds that may useful for (progressive) MSers. So good news for Prof G & Friends (See comments on todays other research post) and the EyeDoctor.