Normally I do not report on animal models of MS but as Mouse Doc is doing “Bad Science Day” at our research Day and the media have found that “Diabetic mice have provided a surprising breakthrough for MS research 1:5:2012″ todays new breakthrough extends this further.

We have been talking about the publication process. Part of this is the independent review process. The peer review process of publication aims to see if work is original and whether the claims made are supported by the data shown and whehter the data presented is put into context of the exisitng knowledge. Sometimes this works sometimes it is not so good.

Experimental autoimmune encephalomyelitis (EAE) is a widely used model of multiple sclerosis. Non obsese diabetic (NOD) mice that can develop type I diabetes, develop EAE as a relapsing-remitting disease that transitions to a chronic progressive disease, making the NOD model the only mouse model that recapitulates the full clinical disease course observed in most multiple sclerosis patients. [Sack the peer-reviewers…..….as they do not know how to do a literature review to see if this is not the ONLY model. Maybe they could have found others maybe one a few or many years ago…likewise do a literature review and wonder if it is really a progressive model or maybe a relapsing neurodegenerative model see figure 1]. If you just look at diagrams with out knowing the course in individual animals it is easy to say that studies show that disease is progressive, when it is degenerative, relapsing-remitting disease that is not occurring in a asychronous fashion (See below).

A T cell receptor (TCR) transgenic mouse that expresses the α and β-chains of a myelin oligodendrocyte glycoprotein (MOG) 35-55-reactive TCR (1C6) on the NOD mouse (shown earlier to be rather resistant to the development of EAE) genetic background was made and called 1C6 TCR transgenic mice. These spontaneously generate both CD4(+) and CD8(+) T cells that recognize MOG and produce proinflammatory cytokines, allowing for the first time to our knowledge the simultaneous examination of myelin-reactive CD4(+) and CD8(+) T cells in the same host. [Check out studies of which there are loads, in normal mice with CD4 and CB8 -specific antibodies]

1C6 CD8(+) T cells alone can induce optic neuritis and mild EAE with delayed onset; however, 1C6 CD4(+) T cells alone induce severe EAE and predominate in driving disease when both cell types are present. [As shown previously about 15-20 years earlier with monoclonal antibodies] When 1C6 mice were crossed with mice bearing an Immunoglobulin heavy chain (antibody) specific for MOG, the mice develop spontaneous EAE with high incidence, but surprisingly the disease pattern does not resemble the neuromyelitis optica-like disease observed in mice bearing CD4(+) T cells and B cells reactive to MOG on the C57BL/6 background. [Most EAE models show optic nerve and spinal cord disease without significant brain involvement…..so crappy reviewers to papers in the past. This is not neuromyelitis optica and the brain lesions found in mice in this study in the cerebellum of mice without typical neurological disease have been reported previously and again ignored in the paper. The authors have spun their story and the reviewers have let them get away with it. The peer-reviewers should retire from the review process due to incompetence] Collectively, the data show that although myelin-reactive CD8(+) T cells contribute to disease, disease is primarily driven by myelin-reactive CD4(+) T cells and that the coexistence of myelin-reactive T and B cells does not necessarily result in a distinct pathological phenotype. [As shown previously in many other mouse studies] 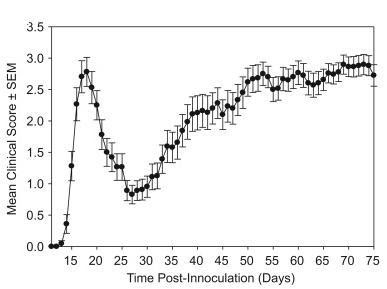 The graph from Team G shows the results of the development of disease in a group of animals with EAE. Disability is on the scale on the left so 3 is more disabled than 1 and time is days after the disease was induced. After the first attack is this progressive disability? Well it looks like it. However this is the result of relapsing disease with neurodegeneration that occurs as a consequence of the relapse. Disease worsening is occuring in a step wise fashion with each attack in each individual animal but apart for the first attack the relapses are not synchronised. Therefore sometimes you need more information to know what is going on than simply looking at line graphs

Is this study interesting “yes it is”, is it good quality work..”yes it is”, are these mice going to be useful “yes they probably are” Can I decipher the good stuff in the paper? Yes I can, but does it over-egg the importance “yes it does”. Just an example of you don’t have to believe everything you read or you have to decipher what is being said. This is what we are trying to do on the blog. Obviously we have our own bias when we review the studies. Any critism being made is supposed to be constructive… as this is an interesting study.