There are strong correlations between cortical atrophy observed by MRI and clinical disability and disease duration in multiple sclerosis (MS). Objective: To evaluate the progression of cortical atrophy (Shrinkage of the surfae layer of the brain brain) over time in experimental autoimmune encephalomyelitis (EAE), the most commonly used animal model for MS. Results: Volumetric changes in brains of EAE mice and matched healthy controls were quantified by collecting high-resolution T2-weighted magnetic resonance images and labeling anatomical structures on the images. In vivo scanning permitted us to evaluate brain structure volumes in individual animals over time and we observed that though brain atrophy progressed differently in each individual animal, all mice with EAE demonstrated significant atrophy in whole brain, cerebral cortex, and whole cerebellum compared to normal controls. Furthermore, we found a strong correlation between cerebellar atrophy and cumulative disease score in mice with EAE. Ex vivo MRI showed a significant decrease in brain and cerebellar volume and a trend that did not reach significance in cerebral cortex volume in mice with EAE compared to controls. There was a significant association between neuronal loss on neuropathology and atrophy (brain shrinkage) of the cerebral cortex by neuroimaging (MRI) . These results demonstrate that repeated imaging of the living mouse is more sensitive to changes that occur in neurodegenerative disease models than imaging after removal of the brain at a point in time. This is the first report of progressive cortical atrophy in vivo in a mouse model of MS. 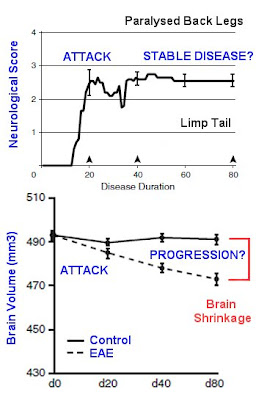 We really need good models of progression and if used wisely even EAE can hold new tools to understand and potentially treat progression. We know that brains shrink with progressive MS and it looks like it is possible to see brain shrinkage in mice also.

I wonder if we try too hard to make animals look like humans as mice don’t have much of a brain and importantly clinical disease in EAE, in my book, is a disease of the spinal cord and not the brain. (They don’t image the spinal cord because they can not do it as it is too small as the machines aren’t powerful enough to see enough of the structures and it moves alot because of breathing).

However, this study could be very interesting as the shrinkage is occurring after the main inflammatory insult that occurs in this model has gone. Therefore the question is what is driving the shrinkage? In this report they point the finger at demyelination…..no big shakes there, but the tools are comming together to do something about this. I know too slow but movement in the right direction.