METHODS:We did a multicentre, phase 2, randomised, double-blind, placebo-controlled, dose-ranging study in participants with clinically definite relapsing-remitting MS. A 24-week treatment period was followed by 12 weeks of core follow-up and 40 weeks of extended follow-up. Participants were randomly assigned, via computer-generated block randomisation in a 1:2:2:2 ratio, to receive one of four treatments twice a day: firategrast 150 mg, firategrast 600 mg, or firategrast 900 mg (women) or 1200 mg (men), or placebo. Brain scans were obtained at 4-week intervals to the end of core follow-up. The primary outcome was cumulative number of new gadolinium-enhancing brain lesions during the treatment phase and was analysed using a generalised linear model with an underlying negative binomial distribution, adjusted for sex, baseline number of new gadolinium-enhancing lesions, and country. This study is registered with ClinicalTrials.gov, NCT00395317. 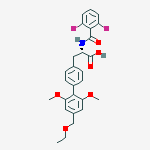 Following the success of Tysabri in stopping relapses and the marked effect of stopping gadolinium enhancing lesions by over 80% compared to placebo, it was obvious to develop a pill that does the same thing as Tysabri. This works by blocking the molecule that lets white blood cells get in the brain.

These would have the advantage that the drug is oral rather than a monthly infusion with tysabri. Also importantly you can get rid of these type of drugs quickly by natural breakdown-mechanisms compared to antibodies such as tysabri that hang around for weeks-months. This is important because we know that PML is a risk of antibody blockage by Tysabri. So if things go wrong you want to get rid of it.

The question we now need to know is does it work to do anything clinically. We have already had one of these types of drugs, which is an oral VLA-4 Antagonist called CPD323, fall by the wayside because it did not work. This study shows an inhibition of new lesions by about 50% at the high doses ( of around 1000mg). This is a lot lower than Tysabri. Will this be enough?.

Also it is perhaps of a worrying note that the low dose (150mg) was associated with 80% MORE lesions than placebo and it will be interesting to see how this relates to clinical disease as there will be follow-up.