Thirty-two patients with early PPMS were assessed at baseline and after five years on the Expanded Disability Status Scale (EDSS), and EDSS step-changes were calculated. At year five, a subgroup of 25 patients and 31 healthy controls underwent a neuropsychological assessment. Baseline imaging consisted of dual-echo (proton density and T2-weighted), T1-weighted volumetric, and diffusion tensor imaging. Fractional anisotropy (FA) maps were created, and fed into tract-based spatial statistics. To compensate for the potential bias introduced by WM lesions, the T1 volumes underwent a lesion-filling procedure before entering a voxel-based morphometry protocol. To investigate whether FA and GM volume predicted EDSS step-changes over five years and neuropsychological tests scores at five years, voxelwise linear regression analyses were performed.

Lower FA in the splenium of the corpus callosum (CC) predicted a greater progression of disability over the follow-up. Lower FA along the entire CC predicted worse verbal memory, attention and speed of information processing, and executive function at five years. GM baseline volume did not predict any clinical variable. 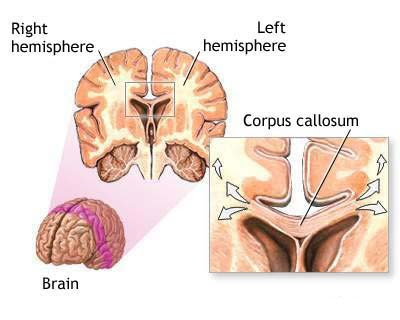 The corpus callosum is the bridge between the left and right side of the brains and is an information motorway. This study is indicating that damage to this structure can result in brain problems in progressive MS