The latest Google data on CCSVI: 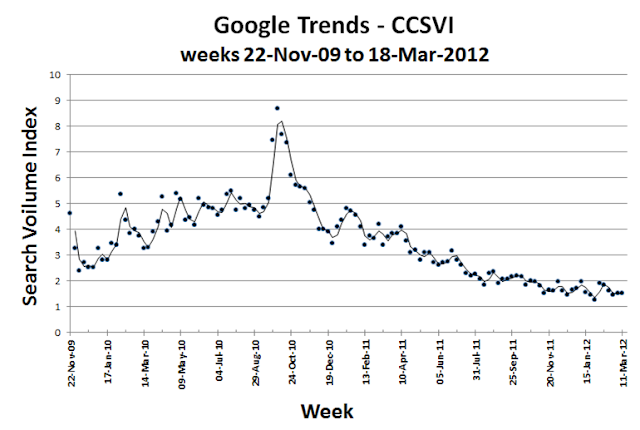 “After yesterday’s rants I suggest we let the data above speak for itself.”


“It is clear that CCSVI is gradually fading; except in Italy which has surpassed Canada in the rankings, with 7 out of 10 cities in  the top 10 being Italian. I am sure the Canadian neurologist must be relieved.”


“I am relieved to note that the UK remains off the top 10 list and English language searches has slipped down to 7th. It appears as if CCSVI is becoming a predominantly non-English phenomenon.”


“Can I remind you that CCSVI, as a social phenomenon, can be classed in the anti-science league, i.e. adopted against the predominant scientific opinion of the time, for which 4 main social drivers have been identified:

“In addition to this there is the wider CCSVI community with their activists, community organisers, easy access to the media and their use of conspiracy theories to attack the scientists, neurologists and other stake-holders who speak out against CCSVI.”

“There is really no substance to support the CCSVI conspiracy theory that ‘Big Pharma’ are trying to prevent MSers accessing an effective treatment via their influence on healthcare professionals.”

“It think it is now time to bed down and wait until the data of the current crop of well-designed CCSVI clinical studies emerge. However, I am sure if these studies are negative – which I strongly suspect based on the current evidence – there will be some reason for the CCSVIers to dismiss them. The history of AIDS/HIV denialism, with its similarities to CCSVI,  teaches us this.”

“My worry is what will next after CCSVI?”

“I am sure the next social phenomenon is just around the corner. Until we take progressive MS seriously and develop effective treatments for MSers with progressive disease the field will remain fertile for anti-science initiatives. The CCSVI saga has divided the MS community. This was, and is unnecessary; we are all striving to improve the lives of people with MS. It saddens me to read some of the personal comments made about me and my colleagues and collaborators.”