An alternative hypothesis has been proposed implicating chronic cerebrospinal venous insufficiency (CCSVI) as a potential cause of multiple sclerosis (MS). We aimed to evaluate the validity of this hypothesis in a controlled animal model. Animal experiments were approved by the institutional animal care committee. The jugular veins in SJL mice were ligated bilaterally (n = 20), and the mice were observed for up to six months after ligation. Sham-operated mice (n = 15) and mice induced with experimental autoimmune encephalomyelitis (n = 8) were used as negative and positive controls, respectively. The animals were evaluated using CT venography and exametazime to assess for structural and haemodynamic changes. Imaging was performed to evaluate for signs of blood-brain barrier (BBB) breakdown and neuroinflammation. Flow cytometry and histopathology were performed to assess inflammatory cell populations and demyelination. There were both structural changes (stenosis, collaterals) in the jugular venous drainage and ahemodynamic disturbances in the brain on exametazime scintigraphy (p = 0.024). In the JVL mice, gadolinium MRI and immunofluorescence imaging for barrier molecules did not reveal evidence of BBB breakdown (p = 0.58). Myeloperoxidase, matrix metalloproteinase, and protease molecular imaging did not reveal signs of increased neuroinflammation (all p>0.05). Flow cytometry and histopathology also did not reveal increase in inflammatory cell infiltration or population shifts. No evidence of demyelination was found, and the mice remained without clinical signs. Despite the structural and haemodynamic changes, we did not identify changes in the BBB permeability, neuroinflammation, demyelination, or clinical signs in the JVL group compared to the sham group. Therefore, our murine (IT IS MOUSE!!!!!!! NOT MURINE THIS CAN MEAN RAT!!!!!-BOTH FROM THE GENUS MURIDAE…….YOU DON’T GET RATINE) model does not support CCSVI as a cause of demyelinating diseases such as multiple sclerosis. I told you this was going to happen!!!! Ugh………what’s more this is no doubt the first one of more to follow.

Well it is official….. blocked jugular veins do not give you MS!!!!, because animals studies show this. You shout they did not not use the Zamboni ultrasound method to detect blockage!, but you can not get much more blocked than having the veins tied shut!. Where there any Dawsons fingers?…..Apparently Not!. Importantly there was no demyelination and no oligodendrocyte death before inflammation, because there was no inflammation!! 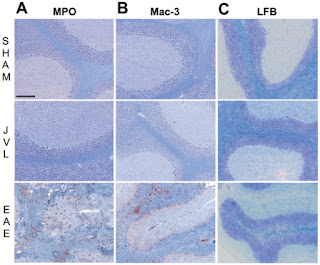 So you put the idea that blocked veins cause, demyelinating disease forward………..and the hypothesis fails. The hypothesis has problems not because it fails in animals, but because it does not take into account the genetics and the aetiology of MS as well as treatment effects and other current knowledge of MS, but I do hope I am wrong and the trials are positive, just as I want all potential drugs to work.

Could this be wrong…..of course it could.

So you say animals do not get MS….well apparently not when they have blocked neck veins!!