A network of hundreds of interconnected and microscopically identifiable areas in the human cerebral cortex controls cognition, perception, and behaviour. Each area covers up to 40 square cm (40cm x 40cm) of the cortical (outside layer of the brain) surface and consists of up to 750 million nerve cells. The architecture which is the spatial distribution, number, size, and shape of nerve cells and their processes varies between different cortical areas of the brain. Nerve cells are interconnected within each area and with other brain regions and the spinal cord via fibre tracts, synapses, transmitters, modulators, and receptors. This incredible structural complexity underlies the functional organisation in the cerebral cortex.

The understanding of the driving forces and organizational principles of the human brain is a challenge by recent research suggests a unifying hierarchical and geometric rules behind the organizational details.

Surface area of the cerebral cortex is a highly heritable trait, yet little is known about genetic influences on regional cortical differentiation in humans. Using a data-driven, fuzzy clustering technique with magnetic resonance imaging data from 406 twins, we parceled cortical surface area into genetic subdivisions, creating a human brain atlas based solely on genetically informative data. Boundaries of the genetic divisions corresponded largely to meaningful structural and functional regions; however, the divisions represented previously undescribed phenotypes different from conventional (non–genetically based) parcellation systems. The genetic organization of cortical area was hierarchical, modular, and predominantly bilaterally symmetric across hemispheres. We also found that the results were consistent with human-specific regions being subdivisions of previously described, genetically based lobar regionalization patterns.

The structure of the brain as a product of morphogenesis (growth) is difficult to reconcile with the observed complexity of cerebral connectivity (connections of nerves in a network). We therefore analyzed relationships of adjacency (next to) and crossing between cerebral (brain) fibre pathways in four nonhuman primate (four different monkeys) species and in humans by using diffusion magnetic resonance imaging. The cerebral fibre pathways formed a rectilinear three-dimensional grid continuous with the three principal axes of development. Cortico-cortical pathways (pathways to the outermost layers of the brain in the grey matter) formed parallel sheets of interwoven paths in the longitudinal (longways) and medio-lateral (middle and side) axes, in which major pathways were local condensations. Cross-species homology was strong (most of the the pathways were similar in the different animals) and showed emergence of complex connectivity by continuous elaboration of this grid structure. This architecture naturally supports functional spatio-temporal (spacial and time effects) coherence, developmental path-finding, and incremental rewiring with correlated adaptation of structure and function in cerebral plasticity and evolution. 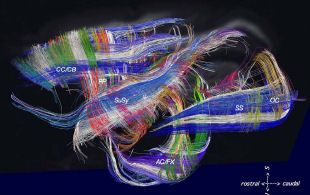 Nerve pathways in a monkey brain

For many years the brain has been thought to be a too complex of mesh of nerves like a spaghetti junction. However, just as the roads around Birmingham can be unravelled with a decent Sat Nav or map, so too have scientists unravelled the nerve pathways by imaging nerve tracts and by making 3D reconstructions. Rather than been a complex mess it seems that brain nerve networks is an orderly structure where brain pathways fit together in a curving grid. Rather than explaining all this in text you should just listen to the pod cast (click here) by the authors of this work to help explain this and then ask any questions. This suggests that the nerve tracts are made in simple grids during nerve development and these then curve as the structures grow and fold over and so simple structures can form complex structures as found in the human brains. Check out the human connectome project (click here) which aims to understand the human neural nework.