BACKGROUND AND PURPOSE: GM pathology is considered a major determinant of disability in MS, but the comprehension of its origin and progression rate is limited by the uncertainty of dating the biologic disease onset. Thus, we planned a longitudinal study aimed at analyzing and comparing cortical pathology in pediatric and adult MS patients at clinical onset.

MATERIALS AND METHODS: Within 12 months from clinical onset, 35 patients with cMS and 57 with aMS were included in a longitudinal study. At baseline the GMfraction (Total grey matter volume) and cortical lesion number (number of lesions in the Grey Matter) and volume (of lesions) were analyzed. Changes were assessed every year for 3 years. Twenty-eight age- and sex-matched normal controls (NC) constituted the reference population.

CONCLUSIONS: Our findings suggest that focal (Cortical lesions) and diffuse (atrophy) GM damage are strictly associated with the biologic onset of MS, and proceed linearly and partly independently of white matter pathology. 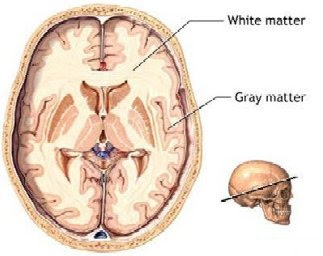 This study looks at the amount of grey matter (the bit of the brain with the nerve cell bodies) and the number and size of lesions in the grey matter, comparing adults and children with MS from onset. Whilst MSers with adult onset may have less grey matter volume than children with MS their rate of change in brain shrinkage is the same, indicating that the processes controlling MS in children is the same as MS in adults. This shrinkage corelated with increased cortical lesion volume and number , however r=0.5 means a very weak correlation r=0 means no correlation and r=1 equals a strong correlation so the more cortical lesions the more shrinkage but as you can see there i shrinkage in healthy controls, so some brain loss is part of growing up and aging.