More Espresso pathology (click)
For
many years MS was though of as a white matter disease, this was because MRI
could not see grey matter lesions and importantly this was because that is what
pathologists were telling us. However they must have had their eyes closed
because you can see some of them with the naked eye and they have been reported
in the literature many years ago.  But if
you do not question dogma some people carry on blindly.
However,
what probably happened is that technicians did the dissections and then they
processed the tissue and sectioned (sliced) and stained them and then gave them
to their bosses to look at and write papers about. The stain (called luxol fast
blue) used to detect myelin over-stained everything in both grey and white
matter. The stain was removed during a process called differentiation. Because
the technician was told that there was no myelin in the grey matter, they kept
going until there was no staining in the grey matter so it was impossible to
see the demyelinated lesion under a microscope. However, when antibodies rather
than chemicals were used to stain, there was no differentiation step and it was
clear that there was myelin in the grey matter and there were lesions of MS
there. 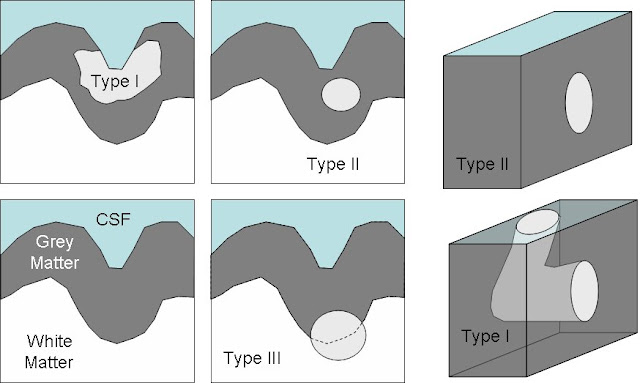 
In  the cortex of the brain, which is the outside bit contain nerve cell bodies, there are three types of histological lesion that occurs in MS. Type III = Lesions on the pial surface and
entering the grey matter, Type II = Lesion surrounded by grey matter and Type I =
Bridge the grey and white matter border. However, I suspect that many of the so
called Type II lesions are actually type I or type III lesion because the slice
is at an angle where it looks like a type II but it due to slicing across the
tip of a hockey stick or a side of a circle as can be seen on the blocks on the right. However does
it matter?
At
the moment we do not know of any functional difference related to these
different lesions.  The type I lesions
are often along the surface of the brain suggestive of some toxic element
within the cerebrospinal fluid or some soluble factor. What is clear is that if
the lesion straddles the grey matter, white matter border the white matter is
much more cellular and contains many more macrophages because there is much
more myelin to be destroyed or cleared up.
MRI can now detect grey matter lesions and they are a widespread and early occurrance of MS
See Dr Klaus’ talk about Grey Matter Lesions at our Research Day
Multiple Sclerosis Research: MS Research Day 2012: Grey matter talk 27 Feb 2012. MS
Research Day 2012: Grey matter talk. Next vid up is Dr Klaus
Schmierer’s talk on his latest research: White matter? Grey matter? The
whole brain matters! .
Also See why Pathologists may not agree with each other and why they can make mistakes click here