As
we have talked about the publication process in the past, as the
American Academy of Neurologists meeting is occurring this week it is easy to see how
journalists can find subjects to post many months or years before the
publication appears in the scientific literature. You can easily see what’s on offer (link), so
I don’t have to go to New Orleans.

Some
studies may never materialise because they are not good enough. This is because
the content is not fully peer-reviewed for meetings; the only thing that gets
looked is the abstract (click to search them). Once a manuscript is
submitted it is possible to get at the nitty-gritty of the article.  To really know whether it is worthwhile, you can
pop along to the meeting and get an early look and ask the authors questions
about the study.

There
are loads of papers on the current and up and coming pharmaceuticals, many of which you have heard about at ECTRIMS or will hear about in the near future, especially
if Prof G does a round up.

How long will it take for the following bits of work
to materialise well we can post a few here and we will see.
It has been found that if you drive
a Th2 response it may be possible to prevent a Th1 response from being
generated so with this thought, some fell that if you were infected with
a parasitic worm that it would drive Th2 responses and as a result stop
autoimunity and MS. So convinced was one guy that he went and jumped in
some foreign cesspool to get infected, his MS did better. Is this co-incidence or related. There are a number of WORM trials on going some are
using hookworms 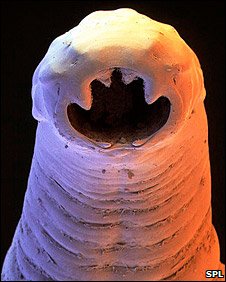 There are other studies using whipworm infections. These are the worms that  can be found in pork.

The
plan is to infect you with eggs these will develop into adult worms.  This will drive a Th2 response such as shown by eosinophilia and your MS will go away?

Are worms good for you… well no they are parasite. Infections however will be
subclinical and if signs of disease occurred or after the experiment is over the
worms can easily be destroyed with drugs, hope the environment is protect two (adult worms can produce 20,000eggs a day). These worms are not the same worms associated with problems of eating undercooked pork caused by Trichinella worms. Remember we used to infect ourselves with worms (tapeworms) to loose weight.

I
remember in the yesteryear when checking the level of autoimmune MS-like disease
in the animals, that the pooh sometimes had loads of worms (pinworms) on
them………………so is that really doing to affect their disease
that much? Then experimental animals often had a few viruses and pinworm
infections
were common in most animal houses, they are now squeeky clean).

OBJECTIVE: To evaluate the safety of Trichuris suis ova (TSO = eggs of the parasitic pig whipworm) treatment in MS patients.
BACKGROUND:
An observational study has suggested that relapsing-remitting multiple
sclerosis (MS) patients with helminth (parasitic worm) infestation associated with
eosinophilia (type of white blood cell that kills worms)  have lower disease activity and disease progression than
uninfected matched MS patients. Treatment with TSO, eggs from the
porcine whipworm, seems safe and effective in the treatment of
inflammatory bowel disease, and previous studies in nine MS patients
showed that the administration of TSO was well tolerated.
DESIGN/METHODS:
The design was an open-label, MRI assessor-blinded study. After a
run-in period for 8 weeks, all patients were treated orally with 2500
live Trichuris suis ova every second week for 12 weeks. MRI was
performed with 3-week intervals. Neurological examinations and blood
sampling were performed at screening, baseline, at week 6 and week 12.
Ten patients, two men and eight women, aged 24-55 years with relapsing
MS were included. Median (range) disease duration 9 (4-34) years, EDSS
2.5 (1-5.0), and relapses within last two years 3 (2-5). Four patients
received no other therapy, while six patients were treated with
interferon (IFN)-beta sc.

RESULTS: Treatment with TSO was well
tolerated and with overall good compliance. There were no safety
concerns. Two patients suffered a relapse in the run-in period, and one
patient suffered a single and another patient two relapses during
treatment with TSO. New MRI activity was observed in 3 patients in the
run-in period (three 3-weekly scans) and in 8 patients during treatment
with TSO (four 3-weekly scans). Immunological studies showed no changes,
apart from eosinophilia, in the treatment period. CONCLUSIONS:
Treatment with TSO seems to be safe and well-tolerated when administered
to patients with relapsing MS. We did not observe any signals
suggesting a beneficial effect of TSO. Further investigations are needed
to assess the effect on the disease.

This trial is probably too small to tell us much, except that humans can tolerate infections of the pig whipworm, so it will need to be done again.