Statins have anti-inflammatory and immunomodulatory properties in addition to lipid-lowering effects. The present study evaluated the effect of atorvastatin added to interferon beta-1b in multiple sclerosis (MS) in a multicentre, randomized, parallel-group, rater-blinded study performed in eight Swiss hospitals. Seventy-seven patients with relapsing-remitting MS started interferon beta-1b every other day.


After 3 months, they were randomized 1:1 to receive atorvastatin 40 mg/day or not in addition to interferon beta-1b until month 15. The primary endpoint was the proportion of patients with new lesions on T2-weighted images at month 15 compared to baseline at month three. At study end, the proportion of patients with new lesions on T2-weighted images was equal in both groups (odds ratio 1.14; 95 % CI 0.36-3.56; p = 0.81). All predefined secondary endpoints including number of new lesions and total lesion volume on T2-weighted images, total number of new Gd-enhancing lesions on T1-weighted images, total brain volume, volume of grey matter, volume of white matter, EDSS, MSFC, relapse rate, time to first relapse, number of relapse-free patients and neutralizing antibodies did not show any significant differences (all p values >0.1). Transient elevations of liver enzymes were more frequent with atorvastatin (p = 0.02).

Statins are cholesterol lowering drugs. A few years ago we got some evidence that statins had the potential to control the immune response in experimental models of MS. A group from Stanford University, USA thought that they made T cells become Th2 cells, but we thought it could stop white blood cells from crossing the blood brain barrier rather than making Th2 cells. This is because we thought that the statins could block a molecule called RhoA from being activated and so blood vessel cells could not remodel their skeleton to allow white blood cells to enter the brain. 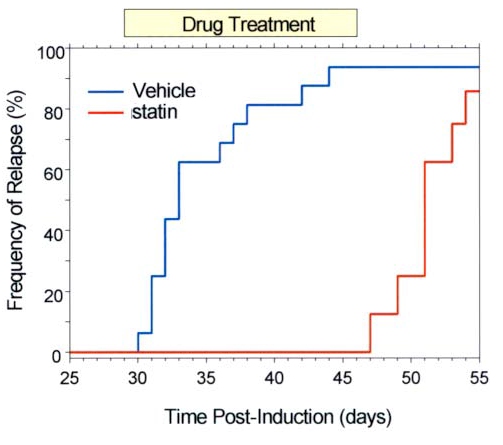 Whilst animals are getting drug there are no relapses, stop the drug which clears from the body in two days and disease comes back, so do you think it is because cells don’t make Th2 cytokines (dogma would suggest that once Th1 cells are generated they will not become Th2 or because something is blocking the cells from entering the brain)

In this study it is diappointing as statins showed no benefit over interferon beta. However beta interferon is pretty good at stopping MRI lesions, and it would not be easy to see a more beneficial effect above that achievable with beta interferon. However rather than being totally useless, it was interesting that in another study that compared statin to placebo there was a significant reduction of MRI-based lesions.
Waubant E et al. Randomized controlled trial of atorvastatin in clinically isolated syndrome: The STAyCIS study. Neurology. 2012; 78:1171-1178

OBJECTIVE: To test efficacy and safety of atorvastatin in subjects with clinically isolated syndrome (CIS).

RESULTS: Due to slow recruitment, enrollment was discontinued after 81 of 152 planned subjects with CIS were randomized and initiated study drug. Median (interquartile range) numbers of T2 and gadolinium-enhancing (Gd) lesions were 15.0 (22.0) and 0.0 (0.0) at baseline. A total of 53.1% of atorvastatin recipients (n = 26/49) met PEP compared to 56.3% of placebo recipients (n = 18/32) (p = 0.82). Eleven atorvastatin subjects (22.4%) and 7 placebo subjects (21.9%) met the PEP by clinical criteria. Proportion of subjects who did not develop new T2 lesions up to month 12 or to starting IFNβ-1a was 55.3% in the atorvastatin and 27.6% in the placebo group (p = 0.03). Likelihood of remaining free of new T2 lesions was significantly greater in the atorvastatin group compared with placebo (odds ratio [OR] = 4.34, p = 0.01). Likelihood of remaining free of Gd lesions tended to be higher in the atorvastatin group (OR = 2.72, p = 0.11). Overall, atorvastatin was well tolerated. No clear antagonistic effect of atorvastatin plus IFNβ-1a was observed on MRI measures.

CONCLUSION: Atorvastatin treatment significantly decreased development of new brain MRI T2 lesion activity, although it did not achieve the composite clinical and imaging PEP. Classification of Evidence: This study provided Class II evidence that atorvastatin did not reduce the proportion of patients with CIS meeting imaging and clinical criteria for starting immunomodulating therapy after 12 months, compared to placebo. In an analysis of a secondary endpoint (Class III), atorvastatin was associated with a reduced risk for developing new T2 lesions.


Therfore the idea based in animals was not completely wrong, however it may not be enough of an activity for it to be useful in relapsing MS. There are pleny of reasons for this . There is a trial of a statin in secondary progresssive MS that may report this year.