Interferon-beta (IFN-beta) is the major treatment for multiple sclerosis. However, this treatment is not always effective. Here we have found congruence in outcome between responses to IFN-beta in experimental autoimmune encephalomyelitis (EAE) and relapsing-remitting multiple sclerosis (RRMS). IFN-beta was effective in reducing EAE symptoms induced by T helper type 1 (T(H)1) cells but exacerbated disease induced by T(H)17 cells. Effective treatment in T(H)1-induced EAE correlated with increased interleukin-10 (IL-10) production by splenocytes. In T(H)17-induced disease, the amount of IL-10 was unaltered by treatment, although, unexpectedly, IFN-beta treatment still reduced IL-17 production without benefit. Both inhibition of IL-17 and induction of IL-10 depended on IFN-gamma. In the absence of IFN-gamma signaling, IFN-beta therapy was ineffective in EAE. In RRMS patients, IFN-beta nonresponders had higher IL-17F concentrations in serum compared to responders. Nonresponders had worse disease with more steroid usage and more relapses than did responders. Hence, IFN-beta is proinflammatory in T(H)17-induced EAE. Moreover, a high IL-17F concentration in the serum of people with RRMS is associated with nonresponsiveness to therapy with IFN-beta.

At present the interferons do not work in about 60-70% of people who take them so it is good business for pharma. So this paper from Larry Steinman and Standford University Colleagues claiming that non-responders could be spotted through interleukin-17 levels would have pharma quaking. So you would be pretty certain they had looked for things already or soon would. This new study from Pharma but including Larry Steinman suggests that the initial observation would help mushrooms grow. 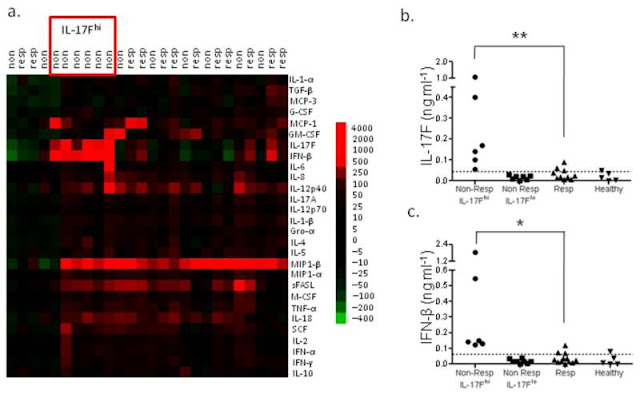 Objective: There is a significant unmet need for serum biomarkers in relapsing-remitting multiple sclerosis (RRMS) that are predictive of therapeutic response to disease-modifying therapies. Following a recent Stanford study which reported that pretreatment levels of serum interleukin (IL)-17F could predict poor response to interferon-β (IFNβ) therapy, we sought to validate the finding using samples from a large clinical trial.
Methods: The validation cohort included 54 good responders (GR) and 64 poor responders (PR) selected from 762 subjects with RRMS from the IM IFNβ-1a dose comparison study (Avonex study C94-805). Subjects were classified as GR and PR based on the number of relapses, Expanded Disability Status Scale score, and new and enlarging T2 lesions on MRI. Serum samples were assayed for IL-17F using a multiplexed Luminex assay and for IL-17F/F using an ELISA. Replicate aliquots from the Stanford study were also assayed to assure reproducibility of methods.

Results: Median pretreatment and post-treatment serum IL-17F levels were not statistically significantly different between GR and PR, and serum IL-7/IL-17F ratios were also not predictive of response status. Replicate aliquots from the Stanford study showed good correlation to their original cohort (r = 0.77).
Conclusions: We were unable to validate the finding that serum IL-17F is a predictor of PR in a large independent cohort of subjects with RRMS. Differences in patient populations and methodology might explain the failure to validate the results from the Stanford study.

The original study was performed on 26 samples and found a signficant difference and this new study was performed on 118 samples and found no difference at all. It is amazing that the first study produced the results it did, which would have occurred with just a 1 in 500 chance, so in 499/500 cases it would have not produced a significant result, as found in this more exhaustive study so a real case of type 1 statistical error (Believed there was a difference when there was not). I do not think it is a Pharma conspiracy to discredit the original data, but it shows that data does need to be replicated otherwise, we would believe everything we read in science comics.

It would be interesting to know how much other stuff never gets repeated, I would bet alot, especially as there would be a publication bias against the negative study seeing the light of day.