BACKGROUND: Restless legs syndrome (RLS) is a frequent neurological
disorder which is presented in idiopathic and secondary form. Idiopathic
RLS is associated with common genetic variants in four chromosomal
regions. Recently, multiple sclerosis (MS) was identified as a common
cause for secondary RLS. The aim of our study was to evaluate the
prevalence of RLS among Czech patients with MS and to further analyze
the impact of known genetic risk factors for RLS in patients with MS.

METHODS:
Each patient underwent a semi-structured interview. A patient was
considered to be affected by RLS if all four standard criteria had ever
been met in their lifetime. The sample was genotyped using 12 single
nucleotide polymorphisms within the four genomic regions, which were
selected according to the results of previous genome-wide association
studies.
RESULTS: A
total of 765 subjects with MS were included in the study and the
diagnosis of RLS was confirmed in 245 subjects (32.1%, 95%CI
28.7-35.4%). The genetic association study included 642 subjects; 203 MS
patients with RLS were compared to 438 MS patients without RLS. No
significant association with MEIS 1, BTBD9, and PTPRD gene variants was
found despite sufficient statistical power for the first two loci. There
was a trend for association with the MAP2K5/SCOR1 gene – the best model
for the risk allele was the recessive one (p nominal=0.0029, p
corrected for four loci and two models=0.023, odds ratio=1.60).
CONCLUSION:
We confirmed that RLS prevalence was high in patients with multiple
sclerosis, but this form did not share all genetic risk variants with
idiopathic (without an known cause) RLS. 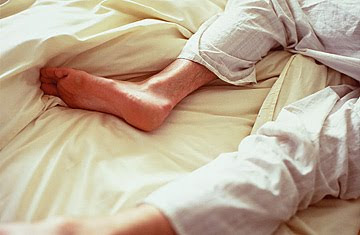 We have posted on and described this subject recently so  no need to comment on this again, but this shows further that restless leg syndrome is common with an occurance of about 30%.