BACKGROUND: The sphingosine 1-phosphate (S1P) receptor modulator FTY720P (Gilenya(R)) potently reduces relapse rate and lesion activity in the neuroinflammatory disorder multiple sclerosis. Although most of its efficacy has been shown to be related to immunosuppression through the induction of lymphopenia, it has been suggested that a number of its beneficial effects are related to altered endothelial and blood-brain barrier (BBB) functionality. However, to date it remains unknown whether brain endothelial S1P receptors are involved in the maintenance of the function of the BBB thereby mediating immune quiescence of the brain. Here we demonstrate that the brain endothelial receptor S1P5 largely contributes to the maintenance of brain endothelial barrier function.
METHODS: We analyzed the expression of S1P5 in human post-mortem tissues using immunohistochemistry. The function of S1P5 at the BBB was assessed in cultured human brain endothelial cells (ECs) using agonists and lentivirus-mediated knockdown of S1P5. Subsequent analyses of different aspects of the brain EC barrier included the formation of a tight barrier, the expression of BBB proteins and markers of inflammation and monocyte transmigration.
RESULTS: We show that activation of S1P5 on cultured human brain ECs by a selective agonist elicits enhanced barrier integrity and reduced transendothelial migration of monocytes in vitro. These results were corroborated by genetically silencing S1P5 in brain ECs. Interestingly, functional studies with these cells revealed that S1P5 strongly contributes to brain EC barrier function and underlies the expression of specific BBB endothelial characteristics such as tight junctions and permeability. In addition, S1P5 maintains the immunoquiescent state of brain ECs with low expression levels of leukocyte adhesion molecules and inflammatory chemokines and cytokines through lowering the activation of the transcription factor NFkappaB.
CONCLUSION: Our findings demonstrate that S1P5 in brain ECs contributes to optimal barrier formation and maintenance of immune quiescence of the barrier endothelium. 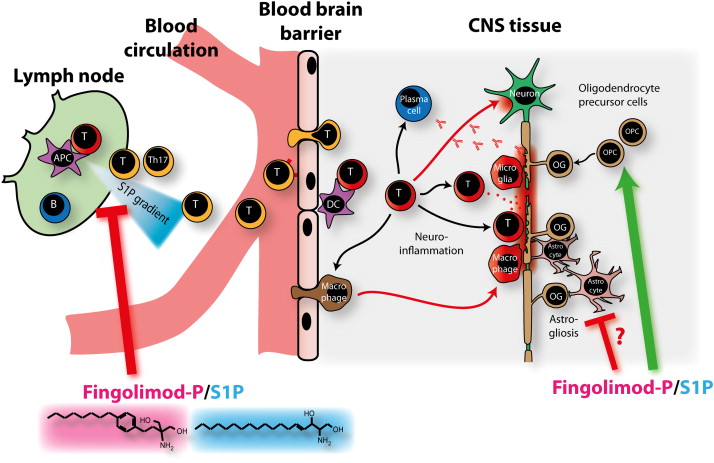 Gilenya  is a sphingosine-1-phosphate modulator. it acts on S1P1 to block lymphocytes gettting from lymph gland to blood. S1P5 has been reported to influnce brain glial cell function. This current study suggests that S1P5 receptors within blood vessels influnece the integrity of the blood brain barrier. They stimulate the receptor and it becomes more impermeable to monocyte migration. Gilenya is an agonist=stimulator at S1P receptors but a functional antagonist=blocker  as stimulation makes the receptor internalise. So does gilenya help by making the blood brain barrier more impermeable?