Background: In multiple sclerosis (MS), gray matter pathology is characterized by less pronounced inflammation when compared with white matter lesions. Although regional differences in the cytoarchitecture may account for these differences, the amount of myelin debris in the cortex during a demyelinating event might also be contributory.
Objective: To analyze the association between myelin debris levels and inflammatory responses
Methods: Cortical areas with distinct and sparse myelination were analyzed for micro- and astrogliosis before and after cuprizone-induced demyelination in mice. In post-mortem tissue of MSers, leucocortical lesions (type III) were assessed for the type and level of inflammation in the cortical and white matter regions of the lesion. Furthermore, mice were injected intracerebrally with myelin-enriched debris, and the inflammatory response analyzed in white and grey matter areas.
Results: Our studies show that the magnitude of myelin loss positively correlates with microgliosis in the cuprizone model. In MS, the number of MHC class II expressing cells (microglia/macrophages) is higher in the white compared with the grey matter part of leucocortical lesions. Finally, direct application of myelin debris into the corpus callosum or cortex of mice induces profound and comparable inflammation in both regions.
Conclusion: Our data suggest that myelin debris is an important variable in the inflammatory response during demyelinating events. 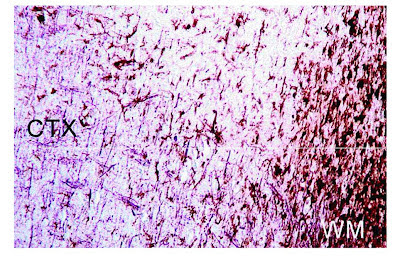