CD20-positive B-cell depletion is a highly promising treatment for multiple sclerosis (MS), but the mechanisms underlying therapeutic effects are poorly understood. B cells are thought to contribute to MS pathogenesis by producing autoantibodies that amplify demyelination via opsonization of myelin. To analyze autoantibody-nondependent functions of B cells in an animal model of MS, we used a novel T cell-driven experimental autoimmune encephalomyelitis (EAE) model in marmoset monkeys (Callithrix jacchus). In this model, demyelination of brain and spinal cord white and gray matter and the ensuing neurological deficits are induced by immunization with myelin oligodendrocyte glycoprotein peptide in incomplete Freund’s adjuvant. Although autoantibodies do not have a detectable pathogenic contribution in the model, depletion of B cells with monoclonal antibody 7D8, a human IgG1κ monoclonal antibody against human CD20, suppressed clinical and pathological EAE. In B cell-depleted monkeys, the activation of peptide-specific Th17-producing and cytotoxic T cells, which in previous studies were found to play an essential role in disease induction, was impaired. Thus, we demonstrate a critical antibody-nondependent role for B cells in EAE, that is, the activation of pathogenic T cells. 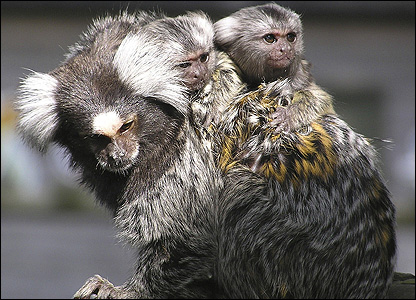 Marmosets are cute little monkeys that are the size of a rat. They can get an MS-like disease. Should we be using primates for MS research? There are a few places in the World that use them and this is not in the United Kingdom.

For many years immunologists have been telling us that MS is mediated by the action of T cells, and then came rituxuimab which is a CD20 specific antibody, that targets B cells and low and behold it blocks the occurrance of relapse. How can that be is the T cell idea dead, does it work because it is killing B cells that contain EBV. This study in marmosets implies the action is because B cells can act as antigen presenting cells and thus stimulate T cells which are driving disease. So the T cell hypothesis of autoimmunity is intact.