Epub: Niepel et al. Association of a deficit of arousal with fatigue in multiple sclerosis: Effect of modafinil. Neuropharmacology. 2012 Jul 2.

Multiple sclerosis
(MS) is a multifocal demyelinating disease of the central nervous
system, leading to chronic disability. Fatigue is a common and
distressing symptom of MS which is unrelated to its clinical form, stage
of development, the degree of disability, or the lesion load on
magnetic resonance imaging. Fatigue in MS is associated with excessive
daytime sleepiness and autonomic dysfunction. Recently it has been
reported that the wakefulness-promoting drug modafinil may relieve
fatigue in MS patients and ameliorate the associated cognitive
difficulties. However, it is not clear to what extent the anti-fatigue
effect of modafinil may be related to its alerting and sympathetic
activating effects.

We addressed this question by comparing three groups
of subjects, MS patients with fatigue, MS patients without fatigue and
healthy controls, matched for age and sex, on measures of alertness
(self-ratings on the Epworth and Stanford Sleepiness Scales and on a
battery of visual analogue scales; critical flicker fusion frequency;
Pupillographic Sleepiness Test; choice reaction time) and autonomic
function (systolic and diastolic blood pressure, heart rate, pupil
diameter), and by examining the effect of a single dose (200 mg) of
modafinil on these measures.

MS patients with fatigue, compared with
healthy controls, had reduced level of alertness on all the tests used;
MS patients without fatigue did not differ from healthy controls. MS
patients with fatigue had a reduced level of cardiovascular sympathetic
activation compared to the other two groups. Modafinil displayed
alerting and sympathomimetic effects (see the tests done above) in all three groups of subjects. As
fatigue in MS is associated with reduced levels of alertness and
sympathetic activity, modafinil may exert its anti-fatigue effect in MS
by correcting these deficiencies.

The anti-fatigue effect of modafinil
may reflect the activation of the noradrenergic locus coeruleus (LC- an area of the brain responsible for the response to stress and panic that makes the neurotranmitter chemical called noradenaline or norepinephrine in American),
since there is evidence that this wakefulness-promoting nucleus is
damaged in MS, and that modafinil, probably via the dopaminergic system (areas of the brain that make dopamine which is involved in control of movement and reward and other things),
can stimulate the LC. 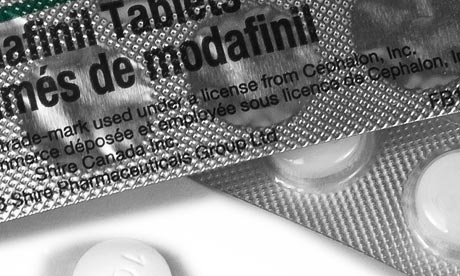 This week we have heard about the possibility of modafinil on progression and you reported some of your experiences as did Prof G talk about the difficulties in prescription. It is not clear from this mechanism of action how it would influence progression