After News of the Scandal of the Pharma bribes you asked 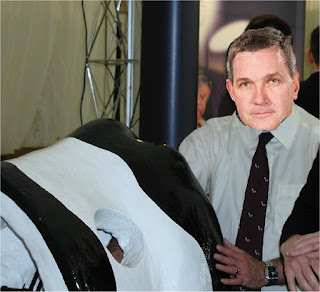 Prof G getting to know a Friesian

I would say about up to the elbow:-)

Below is a credit sized 1Gb memory stick given to Prog G that fits perfectly in your wallet…..It also contains a chip that allowed you to get a corporate lunch in a hospitality area during a meeting. Is it a kick-back and bribe?….Did he go to Lunch?………It’s now mine! 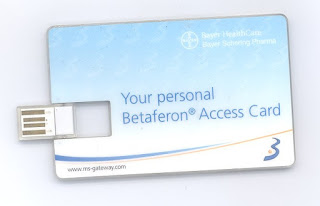 For anyone who has managed to get bog-standard Olympic tickets, it is the case that a certain corporate sponsor petrol (gas in American) company has offered to offset your carbon footprint if you travel to the Olympics. Do you think the Company is Green? Does it that mean that you no longer think the business is a massive polluter of the planet? Does it make you think that you will only buy your petrol from them? Does it make you think about the company for more than an nanosecond (a thousand millionth of a second)?
Surely all forms of corporate sponsorship is about mentally bribing….they will say marketing, networking or educating. Problem with the expose was that there can be seemingly large sums of cash changing hands.

Every university sets consultancy fees and travel requirements for companies, who use their staff for their expertise. The university and/or taxman gets most of it at least in the UK.

If offered, would you turn down some corporate tickets to the 100m Mens final at the Olympics? Mrs & Mr G did. (NB. These tickets were nothing what so ever to do with MS pharma!)

Is Prof G hollier-than-thou?…….no……….he just could not get any Olympic tickets- like most other Londoners and had decided that you can watch the Olympics on TV in London or you can watch it on TV elsewhere, without the rain and the crowds. Trip booked and opportunity of a lifetime missed:-)