Multiple sclerosis (MS) is considered to be an autoimmune, inflammatory disease of the CNS. In most patients, the disease follows a relapsing–remitting course and is characterized by dynamic inflammatory demyelinating lesions in the CNS. Although on the surface MS may appear consistent with a primary autoimmune disease, questions have been raised as to whether inflammation and/or autoimmunity are really at the root of the disease, and it has been proposed that MS might in fact be a degenerative disorder. We argue that MS may be an ‘immunological convolution’ between an underlying primary degenerative disorder and the host’s aberrant immune response. To better understand this disease, we might need to consider non-inflammatory primary progressive MS as the ‘real’ MS, with inflammatory forms reflecting secondary, albeit very important, reactions. 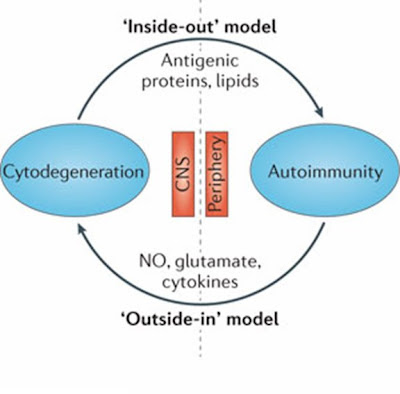 Traditionally, multiple sclerosis (MS) has been considered to be an autoimmune disease in which dysregulated auto-reactive T cells in the periphery cross into the CNS and, together with macrophages and B cells, proceed to destroy various CNS elements. The resulting inflammatory reaction, which typically follows a relapsing–remitting clinical course in the initial stages, causes further demyelination and tissue injury. Such an ‘outside-in’ model is being challenged by a competing view that argues that the initial malfunction occurs within the CNS, similarly to other neurodegenerative disorders. This alternative, ‘inside-out’ model argues that a primary cytodegeneration (possibly focused on the oligodendrocyte–myelin complex) is the initial event, and by releasing highly antigenic constituents, secondarily promotes an autoimmune and inflammatory response in the predisposed host, possibly further driving degeneration.  Some people think that the inflammatory response just comes in to clear the debris up in some form of “protective immunity” This review suggests that MS is a neurodegenerative disease underlying whose clinical course is influenced by relapses. 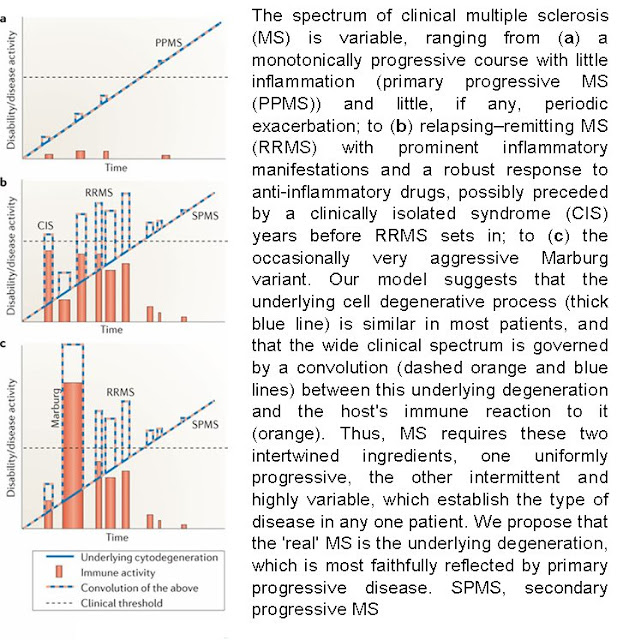 The “outside-in” of myelin basic protein induced autoimmunity is probably a load of guff that has been perpetuated by Fundamentalist Immunologists fixated on some form of EAE. These people have brain-washed the masses with their ideas that largely do not fit many of the realities of MS.

We at Team G have not paid a lot of attention to these myopic ramblings for well over a decade, in fact never paid much attention, and are surprised that a review really needs to reinforce this view. All you have to do is look at MS and read!

There is much evidence to suggest that there is a neurodegenerative process occurring early in MS because we can see this from grey matter and white matter shrinkage. Likewise if you look at MS tissue with ongoing myelin loss there are very few lymphocytes in sight. However, you have to take into account the response to therapy that tells us what inflammation does on balance.

Will the potent DMT influence the rate of progression? I think it will if you start early enough., but will it be enough..only time will tell..the experiment is in motion?

If the inside-out model is the correct one, a key question that arises is: what are the potential underlying mechanisms that trigger progressive cytodegeneration? It is suggested in the manuscript that it is some metabolic disorder. Alternatively could it be a virus? or bacteria? or could it be actually autoimmunity or could it be all of the above?

The answer to the latter could still be yes but not in the worn-out myelin basic protein CD4 T cell way of thinking but in a inside-outside-inside way of thinking……confused?..So am I, but we will put some meat on this idea in another post.

However, the take home-message here is Wakey, Wakey, you can not just think about immunology and autoimmunity in a bubble and expect to see the whole MS story.