OBJECTIVES: Multiple sclerosis (MS) is a chronic inflammatory demyelinating and neurodegenerative disease of the central nervous system (CNS), causing cognitive impairment in 45-65% of patients. Beta-NGF facilitates proper cholinergic transmission in the healthy CNS. In MS-damaged tissue there is a relative deficit of neurotrophins that might be compensated by peripheral blood mononuclear cells (PBMCs) synthesis. Our aim was to evaluate the relationship between PBMCs neurotrophins’ expression and cognitive performance in relapsing-remitting MS (RRMS) patients.

PATIENTS AND METHODS: Beta-NGF, NT-3 and NT-4/5 levels were measured in sera and in PBMCs by ELISA method in 41 RRMS patients in remission. All patients underwent neuropsychological assessment with a battery of 10 tests evaluating a wide range of cognitive functions.

CONCLUSIONS: In RRMS beta-NGF is strongly linked to cognitive performance, which makes it an attractive therapeutic target. It might play a neuroprotective role in MS, especially in the cognitive domain. 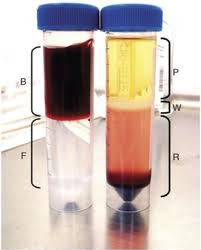 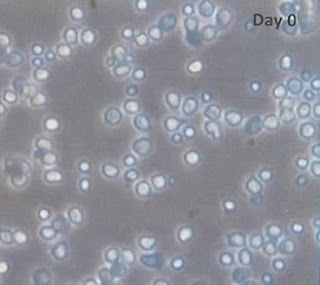 Have you ever wondered what happens to the blood samples we collect for research? What do you blood cells look like? We can test all cells at the same time or separate them in their different types before (a T cell is different from a monocyte). The cells can be just as they are or we can add substances to mimic inflammation in the body. We can see what they produce by analyzing the media that they grow or we can see what they express on their surface. We can test plasma or serum (no cells). We can test the genes and expression of genes…

This group choose to look at a few defined proteins that may have a trophic (supportive) effect on neurons and one of them was decreased in PBMCs of people with cognitive problems. Do PBMCs have an effect in the CNS?