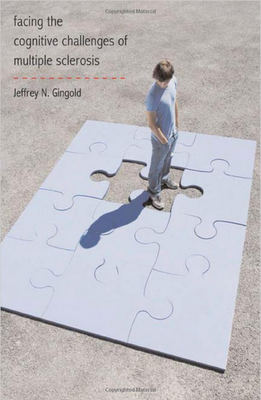 When attorney Jeffrey N. Gingold misplaced his wife on the living room couch, and became lost while driving just blocks from his home, little did he know that he was experiencing a hidden symptom of multiple sclerosis: cognitive difficulties. Facing the Cognitive Challenges of Multiple Sclerosis is a courageous and compelling personal account of one man’s anguishing struggle with this aspect of the disease. It was written for the silent majority of MS patients who are privately dealing with MS cognitive symptoms and potential disabilities.

The National Multiple Sclerosis Society estimates that over 400,000 people in the U.S. have been diagnosed with multiple sclerosis, and there are millions more worldwide. Conservatively speaking, half of them will encounter varying degrees of cognitive difficulties. Facing the Cognitive Challenges of Multiple Sclerosis brings this hidden disability into the open. It is an essential resource that will educate individuals coping with multiple sclerosis, and inform their families, caregivers, doctors and therapists.

This new edition has been revised with on-point cognitive strategies and updated MS resources. The book includes a new foreword and chapters that follow Jeffrey’s journey since 2006. He openly explores some MS physical symptoms, which may accompany the thinking impediments that strike at his cognitive awareness and functions. Jeffrey carves a path of finding physical and cognitive wellness, as well as weighing the need to accept beneficial MS medical therapies. Not only did he become more active in the movement to cure MS, the progression of his MS led to a more controversial MS treatment, in effort to make his disease manageable. Jeffrey also shares the benefits of introducing a “safety person” into a life with MS and the strength gained from helping others, even while they may be assisting you.


“For those of you with cognitive imapirment you may want to try the MS Trust’s Staying Smart site.”