BACKGROUND:The objectives of this cross-sectional study were to assess the prevalence and severity of sleep apnea in patients with multiple sclerosis (MS)referred for overnight polysomnography (PSG) and to explore the radiographic and clinical features that might signal risk for undiagnosed sleep apnea.
METHODS:Apnea-hypopnea (AHI) and central apnea indices (CAI) from laboratory-based PSG among 48 patients with MS were compared with those of group A, 84 sleep laboratory-referred patients without MS matched for age, gender, and body mass index; and group B, a separate group of 48 randomly selected, referred patients.
RESULTS:Mean AHI was higher among patients with MS than among control groups A or B (2-way analysis of variance and multiple linear regression, p = 0.0011 and 0.0118, respectively). Median and mean CAI were also increased among patients with MS in comparison to control groups (Wilcoxon signed rank and multiple linear regression, p = 0.0064 and 0.0027, respectively). Among MS patients with available data, those with evidence of brainstem involvement, compared with groups A and B, showed particularly robust differences in AHI (p = 0.0060 and 0.0016) and CAI (p = 0.0215 and <0.0001). In contrast, MS patients without brainstem involvement, compared with groups A and B, showed diminished differences in AHI, and CAI did not significantly differ among groups.
CONCLUSIONS:These data suggest a predisposition for obstructive sleep apnea andaccompanying central apneas among patients with MS, particularly among those withbrainstem involvement. 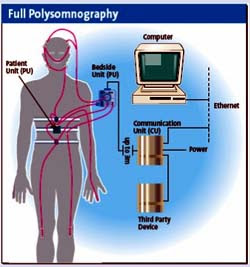 Sleep apnoea is a common cause of fatigue and of marital difficulties (snoring), two problems that affect MSers. CPAP (continuous positive airway pressure) machines can be the solution for sleep apnoea and have a significant impact on the quality of life.This study reminds us to test MSers for sleep apnoea more frequently and not assume that fatigue is “MS fatigue”.