OBJECTIVE:
To explore the relationship of cognitive performance to patterns of
nodal centrality derived from magneto-encephalography (MEG).

CONCLUSIONS:Partial
functional disconnection of the temporal regions was associated with
cognitive dysfunction in MS; increased centrality in parietal hubs may
reflect a shift from temporal to possibly less efficient parietal
processing. To better understand patterns and dynamics of these network
changes, longitudinal studies are warranted, also addressing the
influence of gender. 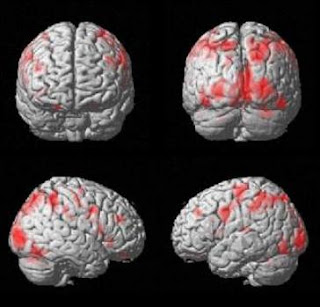 This
is a complex bit of terminology, if interested you may need to read the
article. However in a nutshell this study suggests that there is some
grey matter shrinkage in MSers with cognitive problems and males have
more cognitive problems than females. This may be reflected by changes
in neural networks that handle information, with compensation with using
other bits of the brain.