Megan et all. AP-1 Mediated Transcriptional Repression of Matrix Metalloproteinase-9 by Recruitment of Histone Deacetylase 1 in Response to Interferon β. PLoS ONE 7(8): e42152. doi:10.1371/journal.pone.0042152
Matrix metalloproteinase-9 (MMP-9) is a 92 kDa zinc-dependant endopeptidase that degrades components of the extracellular matrix. Increased expression of MMP-9 is implicated in many pathological conditions including metastatic cancer, multiple sclerosis, and atherosclerosis. Although it has been widely noted that interferon-β (IFNβ) downregulates both the basal and phorbol 12-myristate 13-acetate (PMA)-induced MMP-9 expression at the transcriptional level, the molecular mechanism of this repression is poorly understood.
In the present study we identify a novel mechanism for repression of MMP-9 transcription by IFNβ in HT1080 fibrosarcoma cells. Using reporter assays with promoter deletion constructs we show that IFNβ’s inhibitory effects require a region of the promoter between -154 and -72, which contains an AP-1 binding site.
Chromatin immunoprecipitation (ChIP) studies indicate that IFNβ increases histone deacetylase (HDAC)-1 recruitment to the MMP-9 promoter and reduces histone H3 acetylation, in addition to reduced NF-κB recruitment. ChIP analysis shows that IFNβ induced HDAC1 recruitment to the MMP-9 promoter and IFNβ mediated transcriptional repression is lost when the AP-1 binding site is inactivated by a point mutation.
Altogether, our results establish that the repression of MMP-9 transcription in response to IFNβ occurs by the recruitment of HDAC1 via the proximal AP-1 binding site. 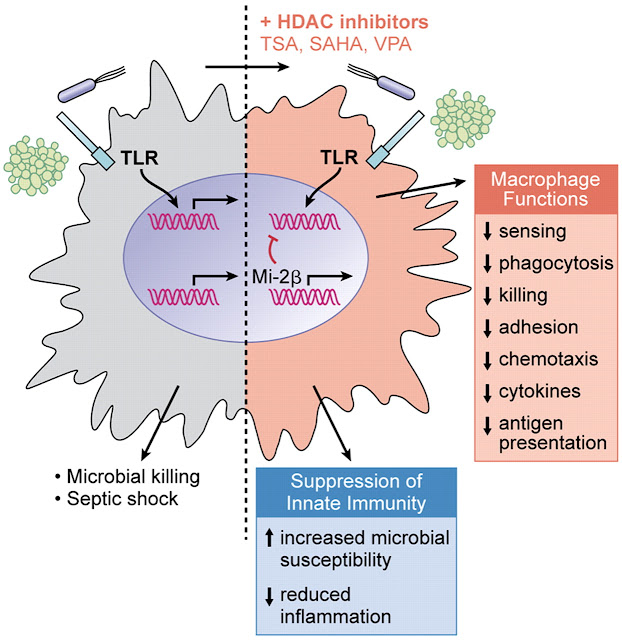 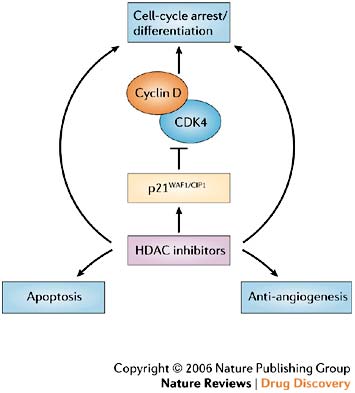 HDAC inhibitors are being pursued in the treatment of cancer
This study shows yet another mechanism of anti-inflammatory function of IFNbeta: HDAC activity inhibitor that decreases MMP-9 (an inflammatory molecule) expression. Histone acetylases (HATs) are enzymes that make DNA less compact and more active in expression of genes (transcription) by acetylation of lysine residues in core DNA proteins called histones. Histone deacetylases (HDACs) are enzymes that have the opposite function, repressing DNA. A new class of drugs that have HDAC inhibitors activity are cytostatic agents that inhibit the proliferation of cancer cells by stopping cell cycle, differentiation and/or causing cell death (apoptosis). Interestingly, in a different aspect of their activity, HDAC inhibitors have a long history of use in psychiatry and neurology as mood stabilizers and anti-epileptic drugs. These drugs are already in use and may have beneficial effect as anti-inflammatory agents, either isolated or in combination.

A critical aspect will be the right dose to use, as the side-effects of drugs with such widespread effect will be significant.