BACKGROUND: The use of oligoclonal bands (OCBs) and cerebrospinal fluid (CSF) parameters are established in the diagnosis of MS, but poorly as markers of disease.
OBJECTIVE: To investigate the role of OCBs in disease course and progression.
METHODS: CSF data for 1120 patients with MS were analyzed for associations between OCBs and CSF parameters and clinical data (disease course [relapsing-onset MS (ROMS) vs primary-progressive MS (PPMS)]), disability progression (proportion reaching Expanded Disability Status Scale 6 within 10 years of onset and progression index) and ethnicity.
RESULTS:  Of patients with MS, 72.5% had detectable OCBs. For patients with detectable OCBs, 84.6% had ROMS and 15.4% PPMS versus 89.7% and 10.3%, respectively for those without detectable OCBs (p=0.04). Total CSF IgG and protein levels were higher in PPMS compared with ROMS (p<0.001). Disease progression appeared independent of OCB status. Patients with CSF (vs without) data were more likely to be male, older at onset, have PPMS and lack optic neuropathy at onset (p<0.001).
CONCLUSIONS: OCB positivity and elevated total CSF IgG and protein were moderately associated with a PPMS disease course, but not disease progression. Patients with atypical clinical presentations were more likely to have had CSF work-up, suggesting a testing bias 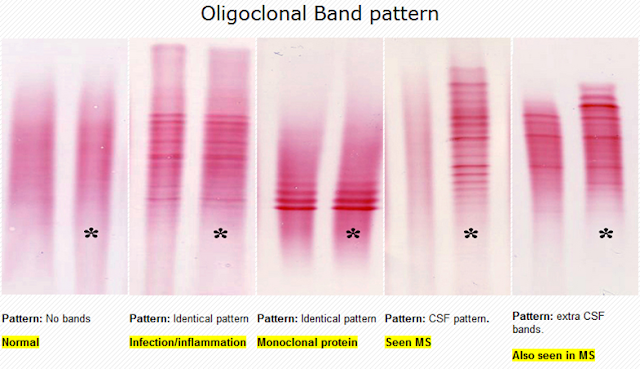 People with progressive MS had slightly higher occurrance of having oligoclonal bands in their CSF than RRMSers. It is said a “moderate association”  whereas I view this as being really a rather weak association. There was higher amounts of antibody in PPMsers. Could this have something to do with B cell follciles in the CNS?. Whilst we appreciate the diagnostic value of OCBs, the prognositic value of saying whether you will get PPMS or RRMS from analysing the CSF is essentially nil.