Lee Y, Morrison BM, Li Y, Lengacher S, Farah MH, Hoffman PN, Liu Y, Tsingalia A, Jin L, Zhang PW, Pellerin L, Magistretti PJ, Rothstein JD Oligodendroglia metabolically support axons and contribute to neurodegeneration. Nature. 2012;487:443-8.
Oligodendroglia support axon survival and function through mechanisms
independent of myelination, and their dysfunction leads to axon
degeneration in several diseases. The cause of this degeneration has not
been determined, but lack of energy metabolites such as glucose or
lactate has been proposed. Lactate is transported exclusively by
monocarboxylate transporters, and changes to these transporters alter
lactate production and use. Here we show that the most abundant lactate
transporter in the central nervous system, monocarboxylate transporter 1
(MCT1, also known as SLC16A1), is highly enriched within
oligodendroglia and that disruption of this transporter produces axon
damage and neuron loss in animal and cell culture models. In addition,
this same transporter is reduced in patients with, and in mouse models
of, amyotrophic lateral sclerosis, suggesting a role for
oligodendroglial MCT1 in pathogenesis. The role of oligodendroglia in
axon function and neuron survival has been elusive; this study defines a
new fundamental mechanism by which oligodendroglia support neurons and
axons. 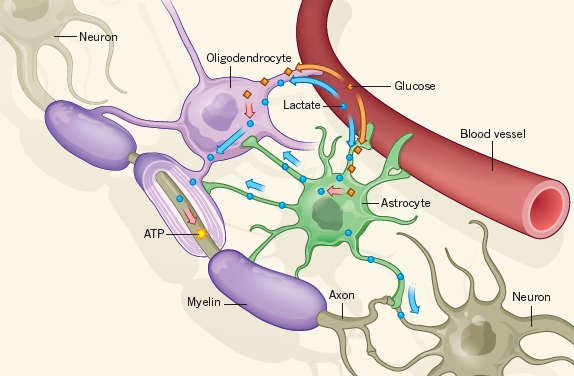 Blood glucose (orange) can be taken up by neuronal brain cells such as oligodendrocytes and astrocyte. Inside the cell glucose is broken down to lactate (blue), which can then be transferred to nerves and used to generate energy (Yellow=Adenosine Tri Phosphate). This occurs via a transporter protein called MCT1 found in myelin. Lactate can also be produced by astrocytes and transferred to nerves through small pores in the myelin.
It has been throught that getting myelin back on demyelinated nerves is the way to help nerves survive and so slow progression. This study shows that it is not just myelin but the oligodendrocyte also give the cells energy factors which help nerves survive. One way we believe that nerves have problems is through influences on energy supply. This will determine whether nerves can survive. We know that glucose is used as an energy supply and that lactic acid builds up when we excerise.  When the rate of demand for energy is high, glucose is broken down and oxidized to pyruvate,
and lactate is produced from the pyruvate faster than the tissues can
remove it, so lactate concentration begins to rise. The production of
lactate is a beneficial process because it regenerates NAD+
which is used up in the creation of pyruvate from glucose, and this
ensures that energy production is maintained and function can continue. Lactate can be transported into cells by transporters and this study found that if lactate transport is disrupted in oligodendrocytes then they cannot provide lactate to nerves which helps support life in the nerves.
This adds further weight to the idea of restoring energy metabolism to nerves is a good thing and you can really feed this into the ideas we have already made about progression in MS.
http://multiple-sclerosis-research.blogspot.co.uk/2011/09/education-treating-progressive-ms.html
or
http://multiple-sclerosis-research.blogspot.co.uk/2011/09/education-targeting-progressive-ms-part_08.html