The survey results on CCSVI have been interesting. When asking Prof G to the post survey, I would have predicted that if all trials were positive the majority of people would believe them and we would then move forward and push to get the treatment made available.

If negative the majority should believe that and move on. However I expected a few people to not believe anything, maybe people who have had good experiences.
If one trial was positive and the other negative. I would have predicted that the majority should say that there was insufficient evidence to make a call and further studies would be required. If there was a difference between the two studies there would be bias. I was thinking that there could be people having faith in Zamboni against the establishment if sufficient CCSVIers voted. By posting on CCSVI at the same time as requesting the survey. I thought that it would attract traffic, which it did. But maybe, the trollers did not vote, too busy writing pants I guess. Maybe they did and they do not trust him. 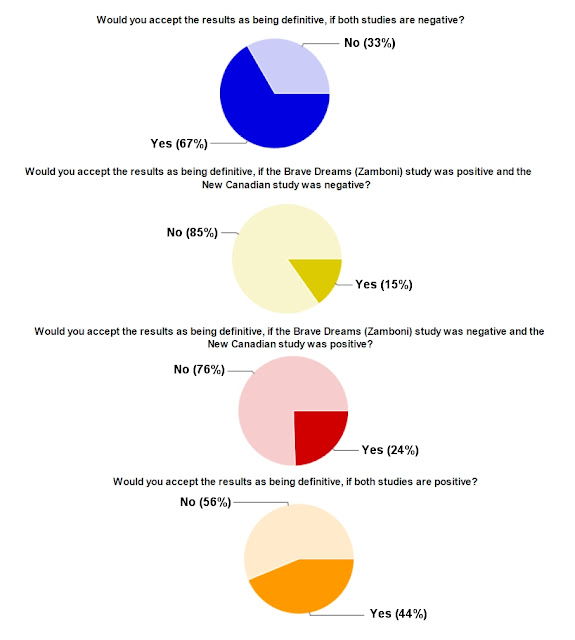 So if both trials were negative the majority ( about 70%) of people would believe them and I guess is an indicator to stop investigating this. This indicated that 30% would not have any faith in the medical establishment to get it right and carry-on regardless.

If there was disagreement in the studies the majority (about of 80%) of people thought that we would need more information. I think there are about 6 trials planned or ongoing. However, there was a suggestion that people would put more faith in a Zamboni-independent results and if we look below we can see that the vast majority would prefer that studies were not led by the Bard of CCSVI.

Most surprising was that if both trials had a positive clinical result then the majority (55%) of people voting would not accept it that there was sufficient evidence to suggest that the CCSVI concept was a goer and that the venoplasty treatment would not be worth pursuing. This is a surprise. Whilst one may have opinions before studies start when the results are in you have to think if it modifies your thoughts.

Maybe our readers of the BLOG are more open-minded and sceptical than some other groups, as you have been following the developments. But that is reassuring and good to see that you would prefer independence in the People undertaking the studies, whether it was an interventional radiologist or Neurologists, so we get a right answer and move on, whatever that is. 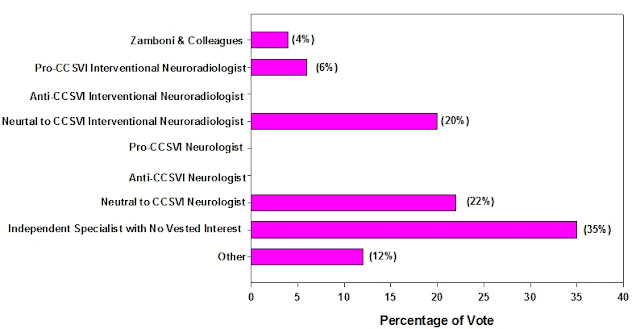 Sorry no comments as we are not near computer today to deal with any unpleasantries.