Objective:
The aim of this first-in-man trial was to assess the feasibility,
safety and tolerability of a novel tolerization regimen in MS patients,
that employs a single infusion of autologous peripheral blood
mononuclear cells chemically coupled with seven myelin peptides
(MOG1-20, MOG35-55, MBP13-32, MBP83-99, MBP111-129, MBP146-170 and
PLP139-154).

Methods: An open label, single center, dose escalation study was
performed in nine MS patients (7 relapsing-remitting and 2 secondary
progressive), EDSS 1-5.5, who were off-treatment for standard therapies.
All patients had to show T cell reactivity against at least one of the
myelin peptides used in the trial. Neurological, MRI, laboratory and
immunological exams were performed to assess the safety, tolerability
and in vivo mechanisms of action of this regimen. We followed the
overall patient immune response as well as responses to myelin antigens
prior to and following the administration of peptide-coupled PBMC.

Results: Administration of antigen-coupled cells was feasible, had a
favorable safety profile and was well tolerated in MS patients.
Compared to the pre-treatment observation period there was no increase
in clinical and MRI parameters of disease activity by this regimen.
Patients receiving the high dose (>1×109) of peptide-coupled cells
showed a decrease in antigen-specific T cell responses following ETIMS
therapy.

Interpretation: The first-in-man clinical trial of autologous
peptide-coupled cells in MS patients, establishes the feasibility,
tolerability and safety of this novel therapeutic approach.

The problem with all current MS treatments is that they are not very effective and have side -effects or they are more effective but have more serious side-effects, This is because these treatments remove part of the immune repertoire that is used to fight infections and cancers. The only thing that gives the immune response its specificity is the target recognition receptors on white blood cells. So if you could only target the immune response that is causing the disease and leave the rest of the immune system intact you would have a treatment that works but would have essentially no side effects…….. The Holy grail of Treatments in Immunology.
OK sit in your seats because I seldom enthuse, but if this study works to the author’s plan it is a CURE to autoimmunity and could be the end to relapsing MS. If you stop relapsing MS you could stop MS, if you start early enough.

That’s the plan, now to bring you down to earth. I would say it is half the cure or maybe a third as I will explain. The other half has already been tried in MS and it is safe. If this half is safe, which appears to be the case, you put the two halves together and relapsing MS is gone for good maybe to a single treatment with no side effects.

Why do I think that this could happen because I have seen this happen in the beasties, many, many, times

Many years ago when I was a PhD student I stated looking on antigen-specific tolerance induction. This means that it is a way of specifically turning the immune system off such that it no longer responds to your target of interest but does not interfere with the function of the rest of the immune system.

I was working on skin diseases in guinea pigs and found that if I put the sensitizing chemical on cells, it could induce immune tolerance (non-responsiveness) against skin disease. If I injected them intravenously. However it sensitized to disease (caused skin reactions) if I put them under the skin. The cells did not have to be alive they were just acting as a carrier that made the sensitizing chemical hang around for long enough.

This had been also been shown in mice by a guy called Henry Claman and another chap called Steve Miller. It is funny that both Steve Miller and I moved onto working on models of multiple sclerosis.

People in Steve Millers lab showed that if you stuck the proteins that you use to induce disease onto white blood cells and inject them into the blood of mice it stopped you from inducing disease. It even worked if you had already sensitized the mice to get disease and so worked in a therapeutic context. This is the basis for the trial.

Now in mice you usually know what the the inducing protein or protein fragment is. This is because this is what you use to cause disease in the first place, so if you induce disease with a protein fragment (a peptide) and then you inject that fragment intravenously it can inhibit T cell-driven autoimmunity. This is a very consistent finding throughout immunology, so there are no special tricks. It is a fact of biology.
In MS you do not really know what the immune response is against (I would say it is different from each individual and it changes as disease evolves, as it is with each individual mice strain. I would also say myelin basic protein would not be high on my agenda) so you have to make educated guesses.

In this study they have plumped for fragments of myelin basic protein (MBP), proteolipid protein (PLP) and myelin oligodendrocyte glycoprotein (MOG) and then fixed them onto the white blood cells. They used fragments of about 20 amino acids long because they are easy to make as you can synthesise them. It is possible that they do not induce antibody responses in contrast to the full protein (about 300-400 Amino acids long) and some of the proteins such as PLP are very difficult to make because they are very insolbule.

They then injected them into the blood of MSers who have immune responses to at least one of the fragments. These were injected into the blood of MSers and it did not cause exacerbation of disease which is the safety concern and luckily they have not caused any strokes, which could be a problem if the cells clumped.. It appears to have inhibited the T cell response, which is is the working mechanism for the therapy. so job done this could be a cure for the autoimmune aspect of MS. This is why this is exciting. The prospect

Let us see how the seven RRMSers do in the future

Now I will give you my view (could be wrong) of the challenges.
Why is this exciting because it is the most robust and simplest way of stopping autoimmune disease in our hands.

As I have said before over 70% of EAE studies give the agents before disease is induced does this approach work? Yes but who cares this has no relevance to MS 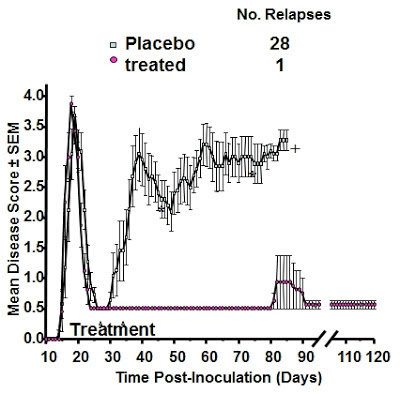 4= hindlimb paralysis 1= paralysed tail. The results show the mean of a group of mice with EAE. Depletion was given on day 27 after the first attack and intravenous myelin-stuck on cells was given one week later.
Team G get are investigating this approach in humans but if we know the delivery of myelin antigens is safe, it will help in the translation of the approach.