There has been some questions about the course of MS and whether the cause of relapsing MS and progressive MS are dependent or independent. Prof G is not sure if the two are dependent on each other, based on animal studies I would say they are probably independent mechanisms, but inter-related. 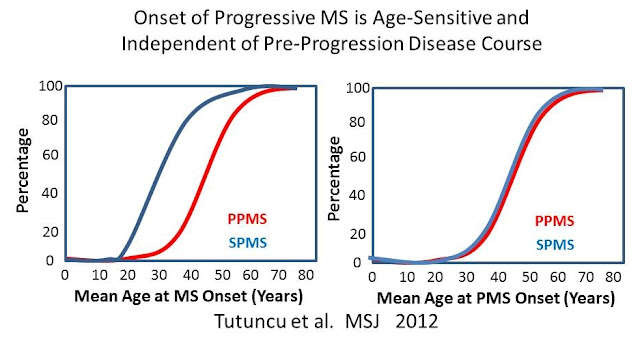 If you look at the age of onset of MS (Left graph-This is perhaps a bit loose as I am sure MS my start earlier before diagnosis), you can see it begins years earlier in RRMSers, who become SPMSers in over 60% of the time. This course tends to be higher in females than males. PPMSers tend to develop MS later in life (Left graph). You may be on the early end but there will be others on the late end of the spectrum.
If you look at the time to development of progressive MS it is on average the same if you are PPMS from onset or if you develop SPMS after RRMS (right graph). This sort of replicates a similar study by Confavreux in 2006, but the timing of the slopes are not quite the same. This is why some people say that progression is not dependent on relapses.
If progression does occur at a similar age, it suggests some issue with the aging process, such as failure to repair, that is central to the progression that occurs in both males and females, or there is some sub-clinical process that occurs in all MSers that takes time to show itself
Although some PPMSers are not happy that current drugs appear always directed to RRMS, at least on average PPMS rears its head later than in RRMS (left graph), so that progression starts at similar time, so that PPMSers have more of a disease-free time prior to diagnosis. 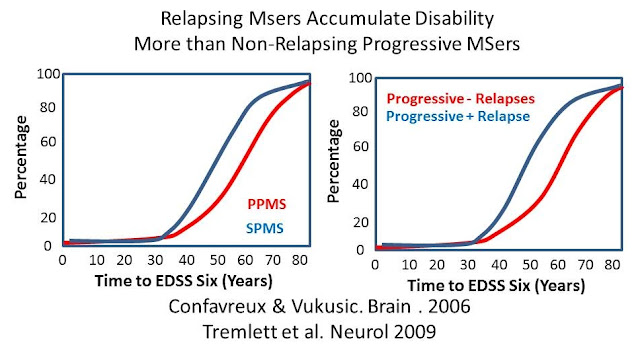 So you say relapses do not matter?. However, if you look to time to a disability point then it appears that if you have relapsing disease that you accumulate disability a few years faster, so inhibiting relapses is a good thing.  Does progressive MS start much earlier and remain subclinical, whereas relapsing MS shows itself before going progressive?
In animals in EAE, progressive disability can occur after one attack or a few attacks and in our hands occurs faster in males than females, just as occurs in MS. In EAE the trigger is an inflammatory attack, in MS we can only speculate, but if you treat the immune response aggressively and early, the relapses stop and the onset of progression is limited. So in the era of the second generation DMT (the above data is not based on second generation DMT) we can only hope that it will slow the accumulation of disability and could it stop it. Nothing has discouraged me from that view yet.