Research: CCSVI a consequence not cause


OBJECTIVE: Chronic cerebrospinal venous insufficiency (CCSVI) was recently described in patients with multiple sclerosis (MS). The hypothesis of the vascular aetiology provides a new approach in the investigation and treatment of MS.METHODS: Our open-label study included 94 MS patients who fulfilled ultrasound sonographic criteria required for CCSVI. The internal jugular and/or azygous veins by a catheter venography were dilated.


RESULTS: In 34.8% of the patients unilateral, in 65.2% bilateral venous abnormalities and in 2.1% no luminal obstructions were demonstrated. The patient group with the higher disability score had a significantly higher number of venous lesions (P < 0.005). Significant improvement of clinical disability in relapsing-remitting patients was (P < 0.001) achieved. In our study no stents were used. Re-stenosis occurred in 21.7% of the patients.


CONCLUSION: The number of venous narrowings is higher in more disabled patients. A significant improvement in clinical disability in the relapsing-remitting group was observed.


As the potential number of lesions increased with increase disability, which is a product of disease duration, then it is further evidence against CCSVI being causal in MS, if the condition truely exisits-based on some peoples findings. The good news that their was a significant treatmet effect so all it needs now is to be successful in a proper blinded control, so it can convince us that it is not some big placebo effect. Apparent re-stenosis occurred 22% of time, so many of you will need to go back for another few grands worth, it will be even more grands worth if people start doing by-pass vein grafts. This is a worrying escalation.


This study introduces a new processing means that uses the original signal (rather than contrast agent concentration) from dynamic susceptibility contrast (DSC) perfusion weighted imaging (PWI) to calculate a relative cerebral blood volume map and a tissue similarity map (TSM). Ten healthy volunteers and eight multiple sclerosis (MS) patients were studied using high resolution PWI. The TSM is found by choosing a reference region in one slice and comparing its signal in a mean squared error sense to the signal from every pixel in all images throughout the brain. The TSMs provide a means to determine which tissues have similar flow characteristics with high contrast and signal-to-noise ratios. The effective blood volume measured from this approach is nearly identical to that from conventional relative cerebral blood volume (rCBV) maps but with better signal-to-noise. Of interest is the fact that choosing one MS lesion as the reference tissue appears to be enough to find nearly all lesions throughout the brain. That is, these lesions all behave the same from a vascular point of view. The TSM results are robust within and across slices properly nulling the same type of tissue throughout the brain for a given reference region. TSM derived rCBV agrees well with the conventional derived rCBV using contrast agent concentration. TSM may provide a new means to study similarities between blood flow patterns in tissue in the brain and in better diagnosing vascular differences between tissues and lesions.


BACKGROUND: A new treatable venous disorder, chronic cerebrospinal venous insufficiency (CCSVI), has been proposed in patients with multiple sclerosis (MS). Its relationship with iron metabolism is suggested, but has not been examined prospectively.


METHODS: We performed extra- and transcranial echo colour Doppler (ECD) in 90 patients with MS and 41 healthy controls (HC). Indices of iron metabolism and the presence of peripheral signs of impaired venous flow were also examined.


CONCLUSIONS: CCSVI is uncommon and is a secondary epiphenomenon in MS and related to more neurological disability and the presence of varicose veins at the legs


More evidence that the CCSVI effect is uncommon and is secondary consequence and not the cause of MS.


BACKGROUND: Multiple sclerosis (MS) is a leading cause of neurological disability in young adults. The most widely accepted hypothesis regarding its pathogenesis is that it is an immune-mediated disease. It has been hypothesised more recently that chronic venous congestion may be an important factor in the pathogenesis of MS. This concept has been named ‘chronic cerebrospinal venous insufficiency’ (CCSVI) and is characterised by stenoses of either the internal jugular or azygos veins, or both. It is suggested that these stenoses restrict the normal blood flow from the brain, causing the deposition of iron in the brain and the eventual triggering of an auto-immune response. The proposed treatment for CCSVI is percutaneous transluminal angioplasty, also known as the ‘liberation procedure’, which is claimed to improve the blood flow in the brain thereby alleviating some of the symptoms of MS.


OBJECTIVES: To assess the effects of percutaneous transluminal angioplasty for the treatment of CCSVI in people with MS.


SEARCH METHODS: We searched the following databases up to June 2012: The Cochrane Multiple Sclerosis and Rare Diseases of the Central Nervous System Group Specialised Register, CENTRAL in The Cochrane Library 2012, Issue 5, MEDLINE (from 1946), EMBASE (from 1974), and reference lists of articles. We also searched several online trials registries for ongoing trials.

SELECTION CRITERIA: Randomised controlled trials assessing the effects of percutaneous transluminal angioplasty in adults with multiple sclerosis, that have been diagnosed to have CCSVI.


DATA COLLECTION AND ANALYSIS: Our searches retrieved 159 references, six of which were to ongoing trials. Based on assessment of the title or abstract, or both, we excluded all of the studies, with the exception of one which was evaluated following examination of the full text report. However, this study also did not meet our inclusion criteria and was subsequently excluded.


AUTHORS’ CONCLUSIONS: There is currently no high level evidence to support or refute the efficacy or safety of percutaneous transluminal angioplasty for treatment of CCSVI in people with MS. Clinical practice should be guided by evidence supported by well-designed randomised controlled trials: closure of some of the gaps in the evidence may be feasible at the time of completion of the six ongoing clinical trials.


Just wasted a few minutes of my life reading this…em Duh..I think we all know there are no trials yet….get a move on and let’s see the effect or not! 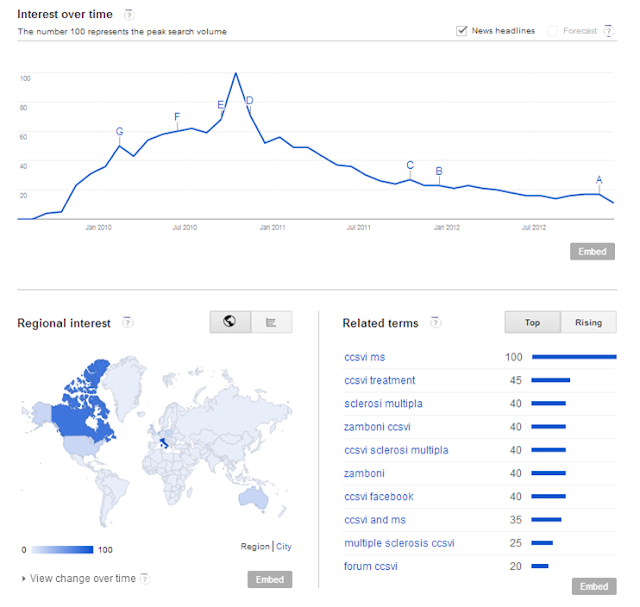