Alcina A et al. Identification of a functional variant in the KIF5A-CYP27B1-METTL1-FAM119B locus associated with multiple sclerosis.J Med Genet. 2012 Nov. [Epub ahead of print]


BACKGROUND AND AIM: Several studies have highlighted the association of the 12q13.3-12q14.1 region with coeliac disease, type 1 diabetes, rheumatoid arthritis and multiple sclerosis (MS); however, the causal variants underlying diseases are still unclear. The authors sought to identify the functional variant of this region associated with MS.

RESULTS: rs6581155, which tagged 18 variants within a region where 9 genes map, was sufficient to model the association. This SNP was in total linkage disequilibrium (LD) with other polymorphisms that associated with the expression levels of FAM119B, AVIL, TSFM, TSPAN31 and CYP27B1 genes in different expression quantitative trait loci studies. Functional annotations from Encyclopedia of DNA Elements (ENCODE) showed that six out of these rs6581155-tagged-SNPs were located in regions with regulatory potential and only one of them, rs10877013, exhibited allele-dependent (ratio A/G=9.5-fold) and orientation-dependent (forward/reverse=2.7-fold) enhancer activity as determined by luciferase reporter assays. This enhancer is located in a region where a long-range chromatin interaction among the promoters and promoter-enhancer of several genes has been described, possibly affecting their expression simultaneously.

CONCLUSIONS:This study determines a functional variant which alters the enhancer activity of a regulatory element in the locus affecting the expression of several genes and explains the association of the 12q13.3-12q14.1 region with MS. 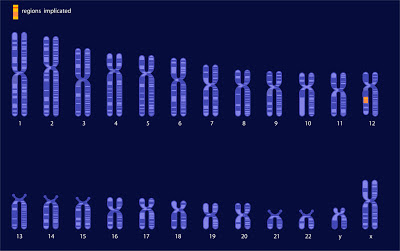 So far about 60 genes linking to susceptibility to MS have been found. Humans have 22 different chromosomes and each chromosome has a short (p) and a long arm (q). A genetic variant linked to susceptibility to autoimmune diseases is reported to be on chromosome 12q. A genetic variant has been found that can alter the production of different genetic elements because it controls part of the DNA upstream of the gene that regulates the production of the gene product. The variant controlled the production of a number of genes such as CYP27B1 (25-Hydroxyvitamin D3 1-alpha-hydroxylase (VD3 1A hydroxylase) also known as cytochrome p450 27B1 (CYP27B1) is a cytochrome P450 enzyme).The enzyme catalyzes the hydroxylation of calcidiol to calcitriol (the bioactive form of Vitamin D). So this locus could affect Vitamin D levels, which we think are important for MS susceptibility. This locus can also effect other genes such as Tetraspanin-31 is a protein that in humans is encoded by the TSPAN31 gene. The proteins mediate signal transduction events that play a role in the regulation of cell development, advillin which can affect nerve function Elongation factor Ts, mitochondrial and methyl transferase (METTL21B),FAM119b and (KIF5A) kinesin family member 5A. This locus could effect