Singh S, Metz I, Amor S, van der Valk P, Stadelmann C, Brück W. Microglial nodules in early multiple sclerosis white matter are associated with degenerating axons. Acta Neuropathol. 2013 Jan 26. [Epub ahead of print]
Microglial nodules in the normal-appearing white matter have been suggested as the earliest stage(s) of multiple sclerosis (MS) lesion formation. Such nodules are characterized by an absence of leucocyte infiltration, astrogliosis or demyelination, and may develop into active demyelinating MS lesions. Although the aetiology of MS is still not known, inflammation and autoimmunity are considered to be the central components of this disease. Previous studies provide evidence that Wallerian degeneration, occurring as a consequence of structural damage in MS lesions, might be responsible for observed pathological abnormalities in connected normal-appearing white matter. As innate immune cells, microglia/macrophages are the first to react to even minor pathological changes in the CNS. Biopsy tissue from 27 MS patients and autopsy and biopsy tissue from 22 normal and pathological controls were analyzed to determine the incidence of microglial nodules. We assessed MS periplaque white matter tissue from early disease stages to determine whether microglial nodules are associated with altered axons. With immunohistochemical methods, the spatial relation of the two phenomena was visualized using HLA-DR antibody for MHC II expression by activated microglia/macrophages and by applying antibodies against damaged axons, i.e., SMI32 (non-phosphorylated neurofilaments) and amyloid precursor protein as well as neuropeptide Y receptor Y1, which marks axons undergoing Wallerian degeneration. Our data demonstrate that the occurrence of microglial nodules is not specific to MS and is associated with degenerating as well as damaged axons in early MS. In addition, we show that early MS microglial nodules exhibit both pro- and anti-inflammatory phenotypes.

This study looks at the white matter around the lesion (perplaque) and finds evidence of microglial cell activation and link this to nerve damage. This can be seen by looking for blebs of amyloid precursor protein, which is shuttled down nerves and blebs out like a water droplet where the nerve is cut. Then below the cut the next degenerates by a process called Wallerian degeneration. This type of early lesion has been reported before on the blog and is subject to much debate about what it tells us about the cause of MS. This lesion is associated with nerve damage rathher than oligodendrocyte damage. What comes first the microglial activation and then the nerve damage or the do they become activated because of nerve damage?


However, before you start bleating that this is yet more evidence against the autoimmune hypothesis, think again. It can and already has been incorporated into an autoimmune hypothesis by the authors. You can hear about this at the research day when DoctorLove presents the early MS lesion. You could of course make the case that this argues against the autoimmune hypothesis as there is not a T cell in sight. Will the Ostriches need to change their world view? However, why would you expect T cells to be central to lesions of the nerve, as they seldom express MHC antigens that are vital for T cell recognition, activation and function?


Importantly if these are the early MS lesions, it does argue against a vascular cause of MS as these nodules are not centred around blood vessels!!!.


What a lot of questions, why not ask DoctorLove them at the Research Day on Saturday. If you can’t make it, then why not ask them here and maybe someone can ask the question for you. The talks are being filmed and will be put on the blog. 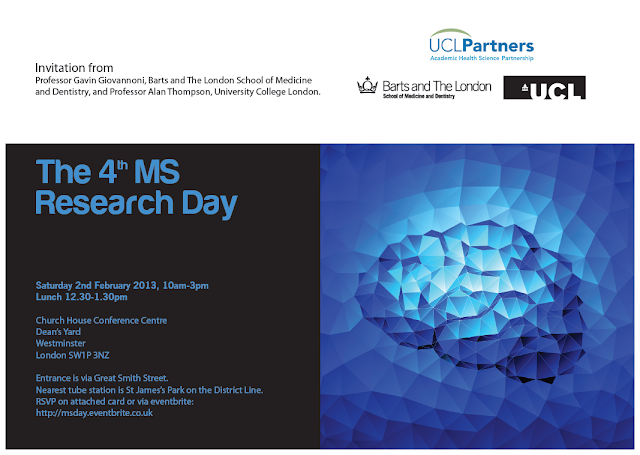 Sorry the tickets are all gone but email us for returns.


If you can not make it, sorry to hear that but please, please let us know if you can’t make it, such that we can allocate your place/lunch to someone else.