#MSBlog: How clean was your childhood? Did you neglect to educate your immune system and now have MS?

Throughout the twentieth century, there were striking increases in the incidences of many chronic inflammatory disorders in the rich developed countries. These included autoimmune disorders such as Type 1 diabetes and MS. Although genetics and specific triggering mechanisms such as molecular mimicry and viruses are likely to be involved, the increases have been so rapid that any explanation that omits environmental change is incomplete. This chapter suggests that a series of environmental factors, most of them microbial, have led to a decrease in the efficiency of our immunoregulatory mechanisms because we are in a state of evolved dependence on organisms with which we co-evolved (and that had to be tolerated) as inducers of immunoregulatory circuits. These organisms (“Old Friends”) are depleted from the modern urban environment. Rather than considering fetal programming by maternal microbial exposures, neonatal programming, the hygiene hypothesis, gut microbiota, and diet as separate and competing hypotheses, he attempts to integrate these ideas under a single umbrella concept that can provide the missing immunoregulatory environmental factor that is needed to explain the recent increases in autoimmune disease. 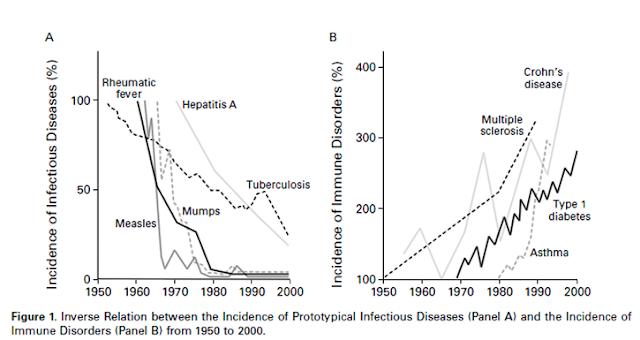 “These graphs demonstrate that as the incidence of infections has plummeted the incidence of common autoimmune diseases has soared. It does make you question what we are doing to ourselves and why.”

From: Bach JF. The effect of infections on susceptibility to autoimmune and allergic diseases. N Engl J Med. 2002 Sep 19;347(12):911-20.
“Our modern sterile, or clean, environment without parasitic and other infections have left our immune systems immature and uneducated. The lack of infections have left our immune systems prone to develop autoimmunity. This is one of the reasons why the incidence of MS is increasing so rapidly and underpins the science of using parasitic infections as a treatement for MS and other autoimmune diseases.”