Seok J et al. Genomic responses in mouse models poorly mimic human inflammatory diseases. PNAS [epub]
A cornerstone of modern biomedical research is the use of mouse models to explore basic pathophysiological mechanisms, evaluate new therapeutic approaches, and make go or no-go decisions to carry new drug candidates forward into clinical trials. Systematic studies evaluating how well mouse models mimic human inflammatory diseases are non–existent. Here, we show that, although acute inflammatory stresses from different aetiologies result in highly similar genomic responses in humans, the responses in corresponding mouse models correlate poorly with the human conditions and also, one another. Among genes changed significantly in humans, the mouse orthologs are close to random in matching their human counterparts (e.g., R2 between 0.0 and 0.1). In addition to improvements in the current animal model systems, our study supports higher priority for translational medical research to focus on the more complex human conditions rather than relying on mouse models to study human inflammatory diseases. 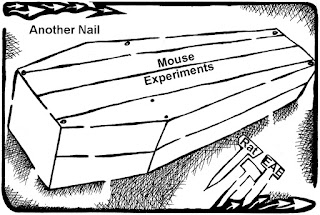 What does this study have to do with MS?, well nothing. However it has an important point. For many years the mantra has been we need a mouse model, especially a gene knockout/transgenic model to study human disease.
In trials on septic shock there have apparently been 150 trials and no translation for human benefit, for EAE we have a few thousand drugs and few have translated into treatments of autoimmunity. This is a common theme in every subject that there is no translation from animals to man.
Are all the models just pants?, or are there other issues like humans are not that great in designing and performing mouse studies? or are clinicans just rubbish at designing effective trials? Whilst, I am pretty sure the last two statements are a large part of the problem, because in humans you usually get the treatment hours or days after the problem starts, when it is too late and in animal studies the drug goes in before you induce the problem. However, in this study it points to problems with the preverbial beasty.
They look at the white blood response in people with severe burns, and trauma  hours, days and a year after the event. They then do the same to the poor animals (25% total body burn-come on guys… really why such serverity…to reflect a human group then select humans with fewer burns) and look at the response over a few hours to a week, without mention of analgesic or whether they were actually kept under anaesthetic for the whole week after the period of scald. They even get human volunteers to get a bacterial toxin and induce that in mice also.
They looked at what gene pathways are activated and it turns out that human inflammation, with what ever the cause, has similar influences in regulation of different gene pathways. Likewise, gene pathways are similarly induced during mouse inflammation, irrespective of the cause, but gulp the human response looks very different from the mouse response and the recovery times differ and are much quicker in mouse compared to humans. 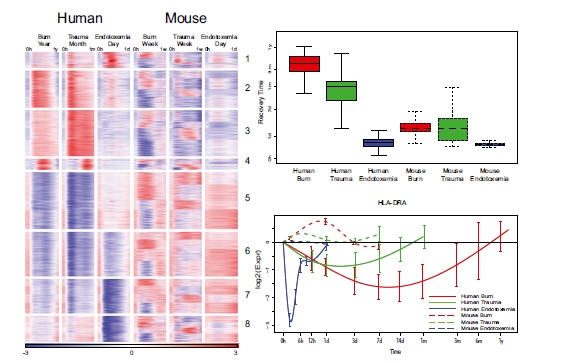 The paper is open access have a read for yourself
Therefore, the inference is
that mouse models are pants and we should just focus on complex human
conditions and not do animal studies, becuase they do not reflect human responses.
They suggest that new approaches should be taken and first genomic
approaches should be undertaken in human disease to define human disease
and this could be used to define the animal model. Synthetic human models could be developed with disease related cell types.

I have no problem with this approach and applaud it. However some form of model is needed because this is part of the drug developmental process that helps pharma commit large resourses for treatment trials.

Within Immunology in MS, a powerful lobby has dictated that the animal model has shaped the way that clinicians approach MS....It is the tail wagging the dog. For progressive MS, it is important that we learn for this experience and get the dog to wag the tail. Indeed it was thought even before the IPMSC meeting last week, which discussed this matter, that examination of human pathology should be used as a cornerstone to define help inform and define the models. 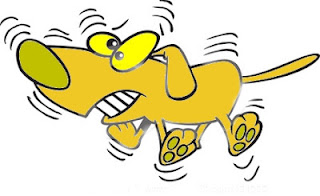 Is the genomic approach the way to go? It appears the case that this divergent set of pathways can result in a similar cytokine phenotype. If the problem is that a man from London goes to Manchester, does it matter if they travel via Birmingham in a car or go via Leeds in a train, the man gets to Manchester in the end. If you stop the man getting to there then you deal with the problem.
The authors of this post argue that the solutions to all problems is a genomic approach. However, the genomic approach has not enlightened us a whole lot about MS susceptibility so far. It tells us that the main genetic aspect is the Major histocompatibility Complex, which we knew over ten years before the new genomics era and that there are over 50 genetic components that have some influence in MS susceptibility. PPMS and RRMS can apparently develop in identical twins, so genetics alone may not be the whole issue on how progression develops.


It would have been relevant to know how different the baseline result is because things are measured as fold increases, if an animal already has high levels of message X there may be no need to increase it. I suspect that they are different to start with, so same conclusion without the suffering that message levels in mouse and humans are different.

The mousers response to this work is that the results in mice essentially come from one strain of mouse. What happens in other strains of mice? Whilst this cop-out is a possibility, it is probably very unlikely to make much of a difference, although the strain they used is one of the worse strains in terms of suceptibility to use for EAE research. Rodents are highly resistant to most types of induced inflammation
compared with humans. They live in holes in the ground and spend most of their lives in the wild rumaging around rubbish (Garbage in American) so they have evolved to deal with dirty, unhealthy situations.
The dose of bactrial toxin used in
most published in vivo studies in mice is 1–25 mg/kg,
which approximates the dose that causes death in half of the mice. This dose is 1000–10,000 times the dose required to induce severe disease with shock in humans
and ∼1,000,000 times the dose used in carefully
controlled study environments in which human volunteers are challenged
with
highly characterized preparations of 2–4 ng/kg bacterial toxin to
elicit fever and cytokines, as used in this study. A direct comparison between the species for live
bacteria is obviously not possible. However, in most mouse models, it is
necessary to administer high doses of live bacteria to
induce illness (usually 10 billion) and whether this difference
in sensitivity is the reason that severe infection in mice has little
resemblance to sepsis syndrome in humans remains to be established by seems plausible. Guinea pigs are much more sensitive to the effects of bacterial toxin. I wonder if they are more human like?
The question is now whether this difference is true for all disease processes.  Are the processes involved in progression likewise very divergent between rodents and humans? Who knows until they are tested.

However, this is yet one more nail being banged into the coffin of animal experiments as some will just remember the take home message that “Mice lead scientists astray”

I wonder if many people remember this one? “S**t-in, *hi*–out” so it is important that we do experiments right.