“I am disappointed with the IPMSC poll results. The results are quite striking in that very few people who completed the poll were expecting a breakthrough! I this because we have been promising so much to progressive MSers for so long that we have lost all credibility?”


“However, there is lots of good news from the meeting. In my opinion, the results simply don’t reflect the enthusiasm of the attendees at the meeting and this included the MSers who attended the meeting. You have to look at the innovations and progress that has been made in relation to MS over the last 20 years. It is simply a matter of time before breakthroughs in progressive MS occur. I am a great believer in innovation and man’s ability to innovate; if we keep investing in research the breakthroughs will happen.” 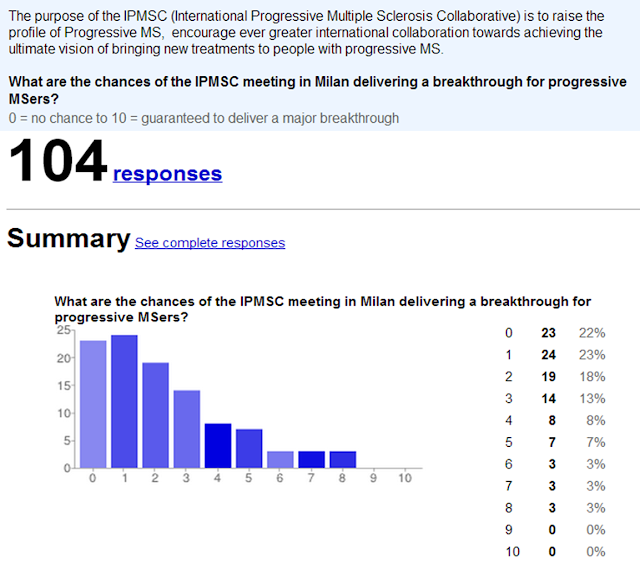 “Although there were a few MSers at the meeting they could have had more involvement in the meeting. I think a section run by professional/expert MSers would have been helpful in focusing the minds on the problems MSers face.”


“This section reviewed  the genetics and pathology of MS. In summary there are no genetic variants that have been identified that drive progressive disease. Not enough time was spent on discussing targets. Marco Salvetti stated that we have too little time to generate new knowledge and find new targets. He appealed to us to mine existing data sets and focus on repurposing existing drugs. His position is fine but blue sky research still needs to be funded. Basic science research is the ‘soul of innovation‘ or the ‘oil that flows through the innovation pipeline‘.”


“Several of the speakers stated that there are no adequate animal models of progressive MS. Mouse Doctor should have been more vocal in supporting and pushing his model, which most of us think is an excellent model of progressive MS. It is really the only one on the block and we have used it to push forward several clinical trials. As always Bruce Trapp showed why he is the most erudite speaker in the field of MS; clear, provocative and to the point. Bruce made the important point that if we don’t find the cause of MS how we can’t really treat it. I agree! We need more resource allocated to finding the cause of MS. he hinted, what I have suspected for a long time, that the current autoimmune paradigm is incorrect. Hans Lassmann tried to cover too much in his talk; I had difficulty following the central thread of his argument. Hans did make the point that we should be focusing our treatments on targets in the innate immune system, which in his opinion is driving progressive disease. The obvious target being activated microglia; the cells in the CNS that clear up debris and produce a lot effector molecules; these are the molecules that do the damage, and are hence therapeutic targets.”


“I spoke in the session and reviewed the current dogma of MS and presented the three clinical trials we are involved in at present that are looking at neuroprotection in MS. The response to my talk was muted; probably because I sound like a stuck record. However, I did get the message through that lumbar punctures and CSF analysis is one of the ways forward. Jeremy Chataway gave an excellent talk on adaptive clinical trial designs. Massimo Filippi’s talk on MRI allowed the MRIologists to hijack the session. This is not surprising as they have the most validated biomarkers for progressive disease. Jerry Wolinsky highlighted the issue of co-morbidities possibly driving progressive MS and stressed how superimposed diseases, for example hypertension, diabetes, etc. making MS worse. He also mentioned the effect of ageing on MS; this is something we have been working as well. Did you know the best predictor of the onset of progressive disease is age? There must be a clue to progressive disease in this fact! Raj Kapoor stated clearly were the investment is needed to make a difference.”


“This sessions highlighted the main problem in the field. Our current outcome measures for measuring progressive disease are not fit for purpose and need an overhaul. Despite this clear message from Jeremy Hobart it seems as we have to stick with the EDSS; this is what the regulators want. At least  there are initiatives to improve the EDSS and the MSFC (Multiple Sclerosis Functional Composite). This session also highlighted the need for using new technologies; for example tablet and smart phone Apps for measuring the impact of MS on function. Some of the emerging developments in this field are very impressive; including one that uses software that runs on an iPad strapped to your back.”


“This session highlighted the massive unmet need there is with symptomatic problems in progressive MS and how poor the current evidence base is. I personally think this section needs it own separate initiative. It will always get short changed by the DMT lobby. The main focus was on cognition; not surprising considering MS is probably a gray matter disease. The talk of the session that interested me most was the one on exercise therapy and it role in treating progressive MS.  It became clear in the question session that exercise studies are hard to do, for example how do you blind them and how do you control for the type and duration of exercise?”


“This was the most inspirational session of all, in particular the talk by Steve Buchsbaum from the Melinda and Bill Gates Foundation. Wow, what and organisation. They are also studying the impact their organisation is having on Science; the early data suggests that they are changing the research agenda. Good for them, the world needs more people focusing on global health. I regret not reminding them as developing nations become healthy  that MS will be as much a problem as it is in countries like Iran and India. The session provided a lot of examples of how successful research networks function and what resources are required to make them work. The talk from Sarah Tabrizi on the Huntington’s Disease (HD) Network is an example of how strong leadership with vision can make a difference; and money!  The HD Network has had ~$15M to run its cohort study. It is clear that we need something like this in MS. “


The following would be my list of action points from the meeting:


1. Start a new prospective progressive MS phenotype cohort study; for this to work it needs visionary and strong leadership with skilled administrative support. Data from this study will need to be stored centrally and shared via an open-source platform.


2. Mine existing data sources and repurpose existing drugs. To do this successfully we need an alternative to big pharma for drug development, in particular a regulatory framework for the licensing of off-patent drugs.


3. Develop new outcome measures; these need to be MSer friendly. A focus on new technologies would help (smart phones, etc.).


5. Actively promote and support new study designs; the more we do the sooner we will get drugs to progressive MSers.


6. Engage regulators at an early stage; we should have had people from the FDA and EMA at this meeting.


7. Manage expectations of MSers; they need to understand the scientific process and time-lines involved. Science needs time to mature.


8. Include CSF studies in all progressive MS trials. The Alzheimer’s Networks came  to this conclusion years ago.


9. Manage RRMS early and aggressively and collect data to help prove the hypothesis that actively treating RRMS prevents or delays the onset of progressive MS. Prevention is better than treatment.


10. Study and treat MS co-morbidities; this may prove to be the low hanging fruit in scoring an early hit in progressive MS.


11. Promote Big Pharma’s role in treating progressive MS; there are several definitive phase 3 trial programmes running at the moment (fingolimod – PPMS, ocrelizumab – PPMS, natalizumab – SPMS, siponimod – SPMS). One of these trials may prove to be the tipping point. Big Pharma was too quite at this meeting. They have the resources and will to make the most difference for progressive MS, we should not forget this!