#MSBlog: Why has evolution invented myelin at least 7 times?

Nervous systems have evolved two basic mechanisms for increasing the conduction speed of the electrical impulse. The first is through axon gigantism: using axons several times larger in diameter than the norm for other large axons, as for example in the well-known case of the squid giant axon. 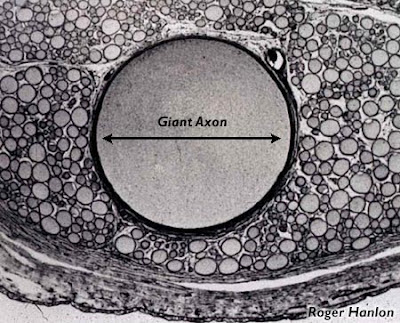 The second is through encasing axons in helical or concentrically wrapped multilamellar sheets of insulating plasma membrane–the myelin sheath. Each mechanism, alone or in combination, is employed in nervous systems of many taxa, both vertebrate and invertebrate. Myelin is a unique way to increase conduction speeds along axons of relatively small caliber. It seems to have arisen independently in evolution several times in vertebrates, annelids and crustacea.

Myelinated nerves, regardless of their source, have in common a multilamellar membrane wrapping, and long myelinated segments interspersed with ‘nodal’ loci where the myelin terminates and the nerve impulse propagates along the axon by ‘saltatory’ conduction. For all of the differences in detail among the morphologies and biochemistries of the sheath in the different myelinated animal classes, the function is remarkably universal.

“It is clear that myelin must provide a survival advantage! Convergent evolution is a useful tool; i.e. evolution has designed and selected for myelin at least 7 times (red families above). Put another way myelin is important stuff. Why? I think myelin is important as it allows energy efficient rapid electrical conduction. It is clear that nerves can conduct impulses without myelin, but this process consumes enormous amounts of energy, which is why MSers get tired or fatigue so quickly when  they use demyelinated pathways. The two videos below demonstrate this. The first is normal energy efficient conduction and the second energy inefficient conduction across a demyelinated segment. The conduction in the demyelinated segment is restored due to synthesis of sodium channels across the segment is liable to block when tired or there is a change in temperature.”