Background: Clinical heterogeneity in multiple sclerosis is the rule. Evidence suggests that HLA-DRB1*15 may play a role in clinical outcome. Spinal cord pathology is common and contributes significantly to disability in the disease.

Aim: To study the influence of HLA-DRB1*15 on multiple sclerosis spinal cord pathology.

Methods: A post-mortem cohort of pathologically confirmed cases with multiple sclerosis (n = 108, 34 males) with fresh frozen material available for genetic analyses and fixed material for pathology was used. HLA-DRB1 alleles were genotyped to select a subset of age- and sex-matched HLA-DRB1*15-positive (n = 21) and negative (n = 26) cases for detailed pathological analyses. For each case, transverse sections from three spinal cord levels (cervical, thoracic and lumbar) were stained for myelin, axons and inflammation. The influence of HLA-DRB1*15 on pathological outcome measures was evaluated.

Conclusion: HLA-DRB1*15 significantly influences pathology in the multiple sclerosis spinal cord. This study casts light on the role of HLA-DRB1*15 in disease outcome and highlights the powerful approach of using microscopic pathology to clarify the way in which genes and clinical phenotypes of neurological diseases are linked. 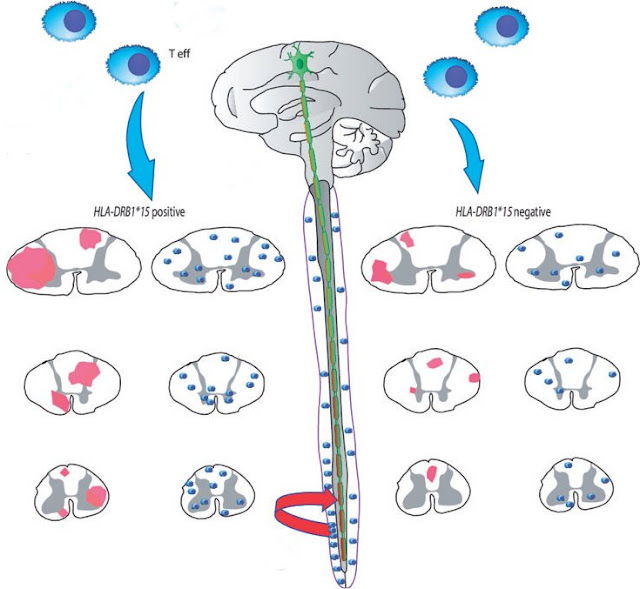 HLA-DRB1*15 is the genetic variant that is common in Northern Europeans that is associated with susceptibility to MS. This study looks at MSers with and without this gene variant. This shows that people with this variant have a few more inflammatory lesions and immune cells in the spinal cord than people without this variant and so they had a bit more demyelination. How this genetic variant causes this is just speculation  one idea is that myelin epitopes breakdown and the peptides made from the break down of proteins fit better into the HLA-DRB1 and so they present this to T cells more and so they can make more lesions and so you get more demyelination, but I think you can make up many different scenarios to explain things. What is needed are more laboratory studies.