Background: This study examined whether health-related quality of life (HRQoL) could predict changes in disability, depression, and fatigue in MSers over a 3-year follow-up period.

Methods: A group of 109 consecutive MSers (McDonald’s criteria) referred to the Institute of Neurology, Belgrade were enrolled in the study. At two time points during the study (baseline, and after a 3-year period) an HRQoL (measured by MSQoL-54), EDSS, Hamilton Rating Scale for Depression (HDRS) and Fatigue Severity Scale (FSS) were assessed.

Results: At the end of a 3-year follow-up, 12 out of 109 MSers (11 %) had dropped out. Multiple linear regression analysis showed that Physical Health scale of MSQoL-54 is significant independent predictor of change in EDSS after 3 years (p = 0.035). Mental health composite score of MSQoL-54 was predictor of change in HDRS score (p = 0.049). In separate regression analysis, only social function was independent predictor of the development of depression (p = 0.041). None of the HRQoL domains had predictive effect on the change of FSS.

Conclusions: This study indicates that baseline HRQoL scores, measured by MSQoL-54, could be applied as a prognostic marker for progression of both, disability, and severity of depressive symptoms in MS.

“Are you surprised by this result? I am not. Baseline quality of life (QoL) measures predict future progression of disability. MSers with poor baseline QoL are more likely to have active or progressive MS and hence this result is not unexpected. It will be interesting to see that as we move into the era of personalised medicine with more effective disease-modifying therapies (DMTs) that will increasingly allow us to treat-2-target of NEDA (no evidence of disease activity) if we will be able to change this observation? I am becoming increasingly confident we can! MSers with highly active RRMS treated early and aggressively and rendered free of disease activity (NEDA) are doing very well. Yes, very well; much better than you would expect from natural history data.” 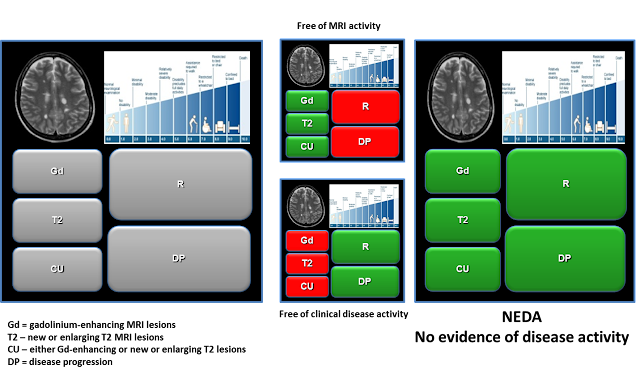 “Is it time for a zero-tolerance strategy in relation to inflammation? A lot of my colleagues are already adopting this approach; particularly in the USA were there is no limitations on prescribing apart from being insured or able to afford the DMTs! American neurologists don’t have a prescribing doughnut to fill.”

Other posts of interest in relation NEDA:
Multiple Sclerosis Research: NEDA: defining a cure
12 Feb 2013
At present NEDA is defined using a composite of a) no relapses, or b) no EDSS progression, or c) no MRI activity (new or enlarging T2 lesions or no Gd-enhancing lesions) (Havrdova, Galetta et al. 2009; Giovannoni, Cook et …
http://multiple-sclerosis-research.blogspot.com/
Multiple Sclerosis Research: Treat-2-Target: NEDA (no evidence of …
08 Jan 2013
Treat-2-Target: NEDA (no evidence of disease activity). “I would appreciate your comments on the following beta version of a treatment or monitoring algorithm for relapsing MSers. The idea is to adopt the strategy of …
http://multiple-sclerosis-research.blogspot.com/