#MSBlog: Wouldn’t it  be nice if we could claim, definitively, that we can delay or preferably prevent SPMS?


OBJECTIVES: To assess factors affecting the rate of conversion to secondary progressive (SP) multiple sclerosis (MS) and its subsequent evolution.

METHODS: Among 806 MSers with relapsing remitting (RR) onset MS from the London Ontario database, we used Kaplan-Meier, Cox regression and multiple logistic regression analyses to investigate the effect of baseline clinical and demographic features on (1) the probability of, and the time to, SP disease, (2) the time to bedbound status (Disability Status Scale (DSS 8)) from onset of progression.

RESULTS: The risk of entering the SP phase increased proportionally with disease duration (OR=1.07 for each additional year; p<0.001). Shorter latency to SP was associated with shorter times to severe disability. The same association was found even when MSers were grouped by number of total relapses before progression. However, the evolution of the SP phase was not influenced by the duration of the RR phase.  Male sex (HR=1.41; p<0.001), older age at onset (age ≤20 and 21-30 vs >30 HR=0.52 (p<0.001), 0.65 (p<0.001), respectively) and high early relapse frequency (1-2 attacks vs ≥3 HR=0.63 (p<0.001), 0.75 (p=0.04), respectively) predicted significantly higher risk of SP MS and shorter latency to progression.  Times to DSS 8 from onset of progression were significantly shorter among those with high early relapse frequency (≥3 attacks), and among those presenting with cerebellar and brainstem symptoms.

CONCLUSIONS: The onset of SP MS is the dominant determinant of long-term prognosis, and its prevention is the most important target measure for treatment. Baseline clinical features of early relapse frequency and age at onset can be used to select groups at higher risk of developing severe disability based on the probability of their disease becoming progressive within a defined time period. 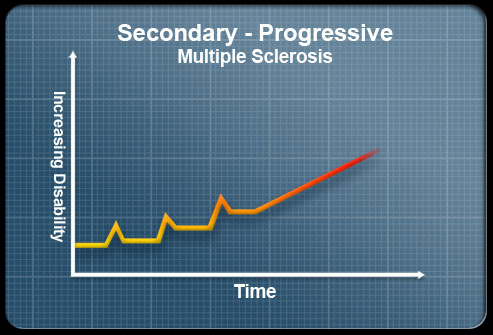 “This study summarises what we already know; (1) male sex, (2) older age of MS onset and (3) high early MS relapse rate are predict earlier onset of SPMS. This cohort of MSers was collected in the pre-DMT era so things have changed since then and all these factor may be irrelevant in teh current context. In particular now that we have more effective therapies.”